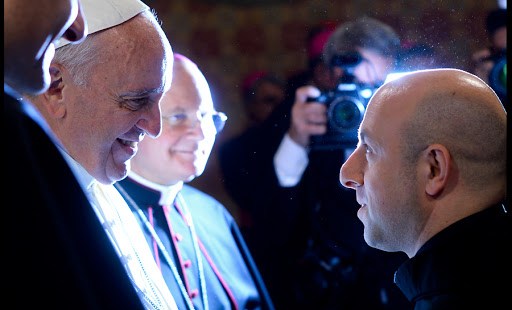 Do orthodoxy and social justice really have to be mutually exclusive?

During a homily the other day the priest issued a convicting call for Christians to be engaged in feeding the hungry, caring for the homeless, visiting those in prison. He finished by saying that we shouldn’t get bogged down with our sins and a focus on sex, but rather engage in what’s most important to Jesus—care for the poor and promoting social justice. I had heard this priest many times before, and knew that he didn’t really mean that sin doesn’t matter. So I find myself asking why would he feel the need to make his strange distinction between loving the poor and avoiding sin. In the Christian life, must we really choose one or other?

His homily was a classic example of the pervasive, false dichotomy between theological doctrine and social justice that has dominated much of Catholic thought and preaching since the 1960s.

This type of thinking has caused division and suspicion among different “strands” of Catholics. A friend once remarked to me that whenever he hears a Catholic use the words “social justice,” he assumes based on experience that the person will support abortion.

The chasm between justice and orthodoxy also has had negative effects on the faithful and church attendance by hollowing out the redeeming message of Catholicism. According to some estimates, up to one third of American Catholics have left the Church since the 1960s, with a large number of them becoming conservative evangelicals. I can’t tell you the number of evangelicals I have met who were raised Catholic, attended Catholic schools, and ended up leaving the Church. The main reason I hear is that they rarely heard about friendship with Jesus or the basic tenets of Christian faith—until they encountered evangelical Protestants.

This exodus isn’t limited to the United States. As the saying goes in Latin America: the Church opted for the poor, and the poor opted for Pentecostalism and Evangelicalism.

One of the interesting developments to watch over the next few years will be to see how Pope Francis helps to break down this misleading doctrine/justice opposition. Since he understands the mistake of cutting off either of the legs that carry Christian life, Francis does not play one against the other, but emphasizes each in its turn, and even explores their interdependence.

From his first moments as pope, Francis has urged Christians to come out of ourselves and engage the poor. “The place for Christ is in the streets,” he said. He warned against the indifference of the rich man to the suffering of Lazarus. As he writes in Evangelii Gaudium,

“Almost without being aware of it, we end up being incapable of feeling compassion at the outcry of the poor, weeping for other people’s pain, and feeling a need to help them, as though all this were someone else’s responsibility and not our own. The culture of prosperity deadens us; we are thrilled if the market offers us something new to purchase. In the meantime all those lives stunted for lack of opportunity seem a mere spectacle; they fail to move us.” (54)

With the same passion, he speaks openly about sin and the devil, is vehemently pro-life and has been a consistent defender of marriage. He speaks about the need for deep prayer life and the importance of the sacraments and human formation in the virtues. At the center of his message is the redemptive work of Jesus Christ, who cares about each of us as a unique and unrepeatable person with an eternal destiny.