“I Can’t Leave My People”: Priest Killed in Syria Hailed as Martyr 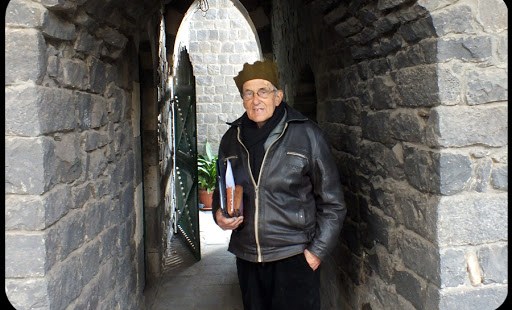 Fr. van der Lugt, S.J. has been praised for his efforts to unite Christians and Muslims.

Wael Salibi, 26, recalled how when the Christian area in Homs was taken over by rebels, 66,000 of the faithful "left their home, and just few of them stayed there. He was the only priest, he stayed in his church.”

“Just months before he died, he said ‘I can’t leave my people, I can’t leave my church, I am director of this church, how can I leave them?’” Salibi told CNA on April 11.

Salibi, who hails from the now-ravished city of Homs, grew up as a close friend and pupil of Fr. Frans, who was brutally killed on April 7.  Days before his 76th birthday, an unknown gunman entered his church, beat him and shot him in the head.

For the past three years Syria has been embroiled in conflict which sprang up after citizens protested the rule of Bashar al-Assad, Syria’s president and leader the country’s Ba’ath Party.

Since then, the violence has morphed into a civil war which has claimed the lives of an estimated 140,000 people. There are currently 2.6 million Syrian refugees in nearby countries, most of them in Lebanon, Jordan, and Turkey, and an additional 6.5 million Syrian people are believed to have been internally displaced by the war.

Currently a refugee living and studying in Rome, Salibi fled his city just a year and a half ago – following a two-week religious visit to Europe – after receiving a call from his mother telling him not to return.

Recalling his life growing up with the priest, Salibi explained that because Fr. Frans had been living and working in Syria since 1966, his family formed close ties with the priest, who would often visit after celebrating Christmas Mass in order to wish his father a happy birthday, and was at one point the spiritual director for his sister.

“This is what makes Fr. Frans special,” Salibi noted, “because he influenced thousands of people, and he remembered all people with little details, and he listened to others.”

On how the priest worked tirelessly for the unity amongst Christians and Muslims in the area, Salibi said that he advanced these relations through two main projects he began during his nearly 50 years of ministry in the country.

The first initiative of Fr. Frans was a project entitled “Al-Maseer” meaning “marching,” Salibi continued, in which groups of 300 at a time, would come from various regions around Syria to work together and discover new parts of the country.

Convening every 2 to 3 months, the group would usually walk together over the weekend and frequently went to little-known areas in order to discover different parts of the country, Salibi went on to say, recalling how one summer the group made a ten day trip in which they walked over 60 kilometers and slept in both churches and mosques along the way.

“I know Syria and I love Syria because of him,” Salibi expressed, observing how “we never felt like he wasn’t Syrian. I think he’s Syrian more than anyone I know.”

Often when the group felt tired because of all the walking, they would be surprised because Fr. Frans was “70 years old and he was the first one to arrive,” Salibi observed, recounting how the Dutchman would always tell them “ilal amam,” meaning “keep going.”

“He always told us…it didn’t just give us like, power, he also made us keep going with our lives,” the young Syrain explained, emphasizing that “I will never forget that word from him. He told us how to be strong.”

Referring to the second project Fr. Frans initiated, Salibi explained that the name was “Al-ard” meaning “the earth” or “the land,” which took place in the countryside outside of Homs, and is a place where the priest would bring handicapped from all the area, both Muslim and Christian, and provide different work and activities for them to do.