John Paul II: A Man Indispensable to the Fall of the Soviet Union 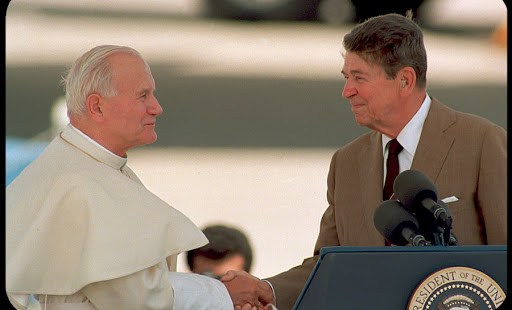 Late Pope’s actions were decisive in the collapse of Russian communism.

Bl. John Paul II’s key role in the collapse of the Soviet Union and the Warsaw Pact can be attributed to his vision of the human being, informed by personalism and the Catholic faith.

The foundations for his role as Vicar of Christ in the fall of Soviet communism were laid by his predecessors, particularly Bl. John XXIII; the two will both be canonized April 27.

The first exchanges between the Vatican and Moscow since 1917 were made on the occasion of Good Pope John’s 80th birthday, and a now opened line of communication allowed Paul VI to pursue a policy of Ostpolitik, dialoguing with officials behind the Iron Curtain to improve the conditions for Christians there.

Crucial in John Paul II’s policy toward the Warsaw Pact was Cardinal Agostino Casaroli, his secretary of state from 1979 until 1990. Cardinal Casaroli had represented the Holy See in negotiations with the communist governments of Hungary, Yugoslavia, and Czechoslovakia.

Bl. John Paul II was ordained a priest of the Archdiocese of Krakow in 1946, shortly after a Soviet-backed communist government had come to power in Poland. Fr. Wojtyla was non-confrontational, but did promote religious liberty and Christianity.

As Archbishop of Krakow he participated in Vatican II and effectively led the Polish bishops’ role in the revision of what became the council’s declaration on religious freedom, Dignitatis humanae – a matter of great concern to the shepherds living under communist governments.

“It is beyond question,” wrote Fr. Andrzej Dobrzynski, director of the Center for Documentation and Research of the Pontificate of John Paul II, in an article in a 2013 issue of Communio, that Dignitatis humanae “provided the Church behind the Iron Curtain with a powerful resource for operating in a complex political situation – and Karol Wojtyla took full advantage of it.”

He largely avoided direct criticism of the communist Polish government, but did work to create new parishes in his archdiocese and to processions.

In 1977, after 20 years of effort, he was able to consecrate a new parish in Nowa Huta, a suburb of Krakow meant to be a “workers’ paradise.”

In his homily at the consecration, as translated by Fr. Dobrzynski, he said: “When Nowa Huta was built with the intention that this would be a city without God, without a church, then Christ came here together with the people and through their lips spoke the fundamental truth about man. Man and his history cannot be reckoned by economic principles along, even according to the most exact rules of production and consumption. Man is greater than this. He is the image and likeness of God himself.”

Shortly after his election as Bishop of Rome, Bl. John Paul II returned to Poland for an eight-day trip in June 1979, which his biographer George Weigel has said “began to dismantle” the Soviet Union.

“I earnestly hope that my present journey in Poland may serve the great cause of rapprochement and of collaboration among nations,” he said June 2 on arriving in Warsaw, and “that it may be useful for reciprocal understanding, for reconciliation, and for peace in the contemporary world. I desire finally that the fruit of this visit may be the internal unity of my fellow-countrymen and also a further favourable development of the relations between the State and the Church in my beloved motherland.”

He reminded the civil authorities of the nation that “peace and the drawing together of the peoples can be achieved only on the principle of respect for the objective rights of the nation, such as: the right to existence, to freedom, to be a social and political subject, and also to the formation of its own culture and civilization.”

Consecrating his homeland to Our Lady at her shine at Czestochowa June 4, he entrusted to her “all the difficult problems of the societies, systems and states—problems that cannot be solved with hatred, war and self-destruction but only by peace, justice and respect for the rights of people and of nations.”

And when leaving Poland on June 10, he said, “Our times have great need of an act of witness openly expressing the desire to bring nations and regimes closer together, as an indispensable condition for peace in the world. Our times demand that we should not lock ourselves into the rigid boundaries of systems, but seek all that is necessary for the good of man, who must find everywhere the awareness and certainty of his authentic citizenship. I would have liked to say the awareness and certainty of his pre-eminence in whatever system of relations and powers.”

“Thank you, then, for this visit, and I hope that it will prove useful and that in the future it will serve the aims and values that it had intended to accomplish.”

The Soviet-backed government was eventually forced to negotiate with Solidarity, and Poland held semi-free elections in 1989, which led to a coalition government.

That year, a series of revolutions led to the fall of communism in Europe, the destruction of the Berlin Wall, and the dissolution of the Soviet Union in 1991.

Mikhail Gorbachev, the Soviet head of state, visited John Paul II at the Vatican Dec. 1, 1989, in what was considered Christianity’s triumph over Soviet communism.