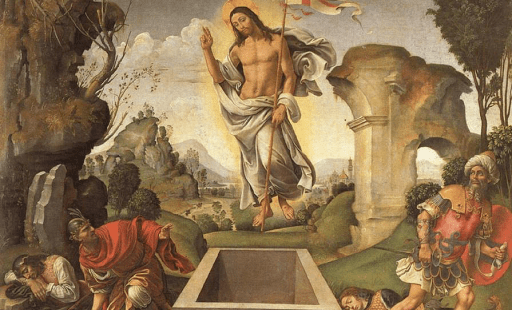 The new order of creation is here.

In first century Judaism, there were many views concerning what happened to people after they died. Following a very venerable tradition, some said that death was the end, that the dead simply returned to the dust of the earth from which they came. Others maintained that the righteous dead would rise at the close of the age. Still others thought that the souls of the just went to live with God after the demise of their bodies. There were even some who believed in a kind of reincarnation.

What is particularly fascinating about the accounts of Jesus’ resurrection is that none of these familiar frameworks of understanding is invoked. The first witnesses maintain that the same Jesus who had been brutally and unmistakably put to death and buried was, through the power of God, alive again. He was not vaguely “with God,” nor had his soul escaped from his body; nor had he risen in a purely symbolic or metaphorical sense. He, Jeshoua from Nazareth, the friend whom they knew, was alive again. What was expected for all the righteous dead at the end of time had happened, in time, to this one particular man, to this Jesus. It was the very novelty of the event that gave such energy and verve to the first Christian proclamation. On practically every page of the New Testament, we find a grab-you-by-the-lapels quality, for the early Christians were not trading in bland spiritual abstractions or moral bromides. They were trying to tell the whole world that something so new and astounding had happened that nothing would ever again be the same.

Over the past couple of centuries, many thinkers, both inside and outside of the Christian churches, endeavored to reduce the resurrection message to the level of myth or symbol. Easter, they argued, was one more iteration of the “springtime saga” that can be found, in one form or another, in most cultures, namely, that life triumphs over death in the “resurrection” of nature after the bleak months of winter. Or it was a symbolic way of saying that the cause of Jesus lives on in his followers. But as C.S. Lewis keenly observed, those who think the resurrection story is a myth haven’t read many myths. Mythic literature deals in ahistorical archetypes, and thus it tends to speak of things that happened “once upon a time” or “in a galaxy far, far away.” But the Gospels don’t use that sort of language. In describing the resurrection, they mention particular places like Judea and Jerusalem, and they specify that the event took place when Pontius Pilate was the Roman governor of the region, and they name distinct individuals—Peter, John, Thomas, etc.—who encountered Jesus after he rose from the dead. Moreover, no one dies defending mythic claims. The myths of Greece, Rome, and Egypt are powerful and illuminating indeed, but there are no martyrs to Zeus or Dionysus or Osiris. But practically all of the first heralds of the resurrection went to their deaths defending the truth of their message.

Yet assuming the resurrection is true, what does it mean? It means, first, that the customary manner in which we understand the relationship between order and violence—from the Epic of Gilgamesh to “Game of Thrones”—has to be rethought. On the standard Realpolitik reading of things, order comes about through the violent imposition of strength. And if that order is lost or compromised, it must be restored through answering violence. In Jesus’ time, the great principle of order was the Empire of Rome, which maintained its hold through the exertions of its massive army and through the imposition of harsh punishment on those who opposed its purposes. The most terrible and fearsome of these punishments was, of course, the cross, a particularly brutal mode of torture that was purposely carried out in public so as to have greatest deterrent effect. It was precisely on one of these Roman crosses that Jesus of Nazareth was put to death, having been betrayed and abandoned by his friends and condemned by a corrupt tribunal of collaborators.

When the risen Jesus presented himself alive to his disciples, they were, we are told, afraid. Their fear might not have been simply a function of their seeing something uncanny; it might have been grounded in the assumption that he was back for vengeance. However, after showing his wounds, the risen Jesus said to his friends, “Shalom,” Peace. The teacher who had urged his followers to turn the other cheek and to meet violence with forgiveness exemplified his own teaching in the most vivid way possible. And what he showed, thereby, was that that the divine manner of establishing order has nothing to do with violence, retribution, or eye-for-an-eye retaliation. Instead, it has to do with a love which swallows up hate, with a forgiveness which triumphs over aggression. It is this great resurrection principle which, explicitly or implicitly, undergirded the liberating work of Martin Luther King, Jr. in America, of Gandhi in India, of Bishop Tutu in South Africa, and of John Paul II in Poland. Those great practitioners of non-violent resistance were able to stand athwart the received wisdom only because they had some sense that in opting for the way of love they were going with the deepest grain of reality, operating in concert with the purposes of God.

Secondly, the resurrection means that God has not given up on his creation. According to the well-known account in the book of Genesis, God made the whole array of finite things—sun, moon, planets, stars, animals, plants, things that creep and crawl on the earth—and found it all good, even very good. There is not a hint of dualism or Manichaeism in the Biblical vision, no setting of the spiritual over and against the material. All that God has made reflects some aspect of his goodness, and all created things together constitute a beautiful and tightly-woven tapestry. As the Old Testament lays out the story, human sin made a wreck of God’s creation, turning the garden into a desert. But the faithful God kept sending rescue operation after rescue operation: Noah’s Ark, the prophets, the Law and the Temple, the people Israel itself. Finally, he sent his only Son, the perfect icon or incarnation of his love. In raising that Son from the dead, God definitively saved and ratified his creation, very much including the material dimension of it (which is why it matters that Jesus was raised bodily from death). Over and again, we have said no to what God has made, but God stubbornly says yes. Inspired by this divine yes, we always have a reason to hope.

Courtesy of Word on Fire