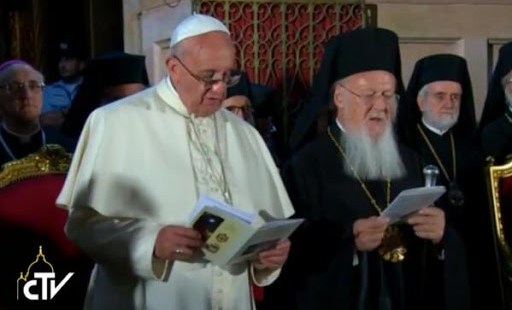 Leaders pledge to continue on the path towards unity between the Catholic and Orthodox Churches.

(Vatican Radio)  Pope Francis and the Ecumenical Patriarch, Bartholomew I, on Sunday held private talks in Jerusalem and signed a Common Declaration in which they pledged to continue on the path towards unity between the Catholic and Orthodox Churches. Their encounter marked the 50th anniversary of the historic meeting between Pope Paul VI and the Patriarch Athenagoras in 1964.   In their joint declaration, Pope Francis and Patriarch Bartholomew  said it is their duty to work together to protect human dignity and the family and build a just and humane society in which nobody feels excluded.   They also stressed the need to safeguard God’s creation and the right of religious freedom.  The two leaders expressed concern over the situation facing Christians amidst the conflicts of the Middle East and spoke of the urgency of the hour that compels them to seek the reconciliation and unity of the human family whilst fully respecting legitimate differences.

Please find below the full text in English of the Common Declaration of Pope Francis and the Ecumenical Patriarch Bartholomew I:

1. Like our venerable predecessors Pope Paul VI and Ecumenical Patriarch Athenagoras who met here in Jerusalem 50 years ago, we too, Pope Francis and Ecumenical Patriarch Bartholomew, were determined to meet in the Holy Land “where our common Redeemer, Christ our Lord, lived, taught, died, rose again, and ascended into Heaven, whence he sent the Holy Spirit on the infant Church” (Common communiqué of Pope Paul VI and Patriarch Athenagoras, published after their meeting of 6 January 1964). Our meeting, another encounter of the Bishops of the Churches of Rome and Constantinople founded respectively by the two Brothers the Apostles Peter and Andrew, is a source of profound spiritual joy for us. It presents a providential occasion to reflect on the depth and the authenticity of our existing bonds, themselves the fruit of a grace-filled journey on which the Lord has guided us since that blessed day of 50 years ago.

2. Our fraternal encounter today is a new and necessary step on the journey towards the unity to which only the Holy Spirit can lead us, that of communion in legitimate diversity. We call to mind with profound gratitude the steps that the Lord has already enabled us to undertake. The embrace exchanged between Pope Paul VI and Patriarch Athenagoras here in Jerusalem, after many centuries of silence, paved the way for a momentous gesture, the removal from the memory and from the midst of the Church of the acts of mutual excommunication in 1054. This was followed by an exchange of visits between the respective Sees of Rome and Constantinople, by regular correspondence and, later, by the decision announced by Pope John Paul II and Patriarch Dimitrios, of blessed memory both, to initiate a theological dialogue of truth between Catholics and Orthodox. Over these years, God, the source of all peace and love, has taught us to regard one another as members of the same Christian family, under one Lord and Savior, Jesus Christ, and to love one another, so that we may confess our faith in the same Gospel of Christ, as received by the Apostles and expressed and transmitted to us by the Ecumenical Councils and the Church Fathers. While fully aware of not having reached the goal of full communion, today we confirm our commitment to continue walking together towards the unity for which Christ our Lord prayed to the Father so “that all may be one” (Jn 17:21).

3. Well aware that unity is manifested in love of God and love of neighbor, we look forward in eager anticipation to the day in which we will finally partake together in the Eucharistic banquet. As Christians, we are called to prepare to receive this gift of Eucharistic communion, according to the teaching of Saint Irenaeus of Lyon (Against Heresies, IV,18,5, PG 7,1028), through the confession of the one faith, persevering prayer, inner conversion, renewal of life and fraternal dialogue. By achieving this hoped for goal, we will manifest to the world the love of God by which we are recognized as true disciples of Jesus Christ (cf. Jn 13:35).