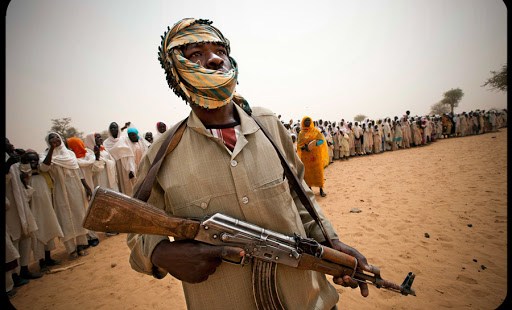 The media only ensure that there will be more such incidents.

Nigerian Air Marshal Alex Badeh announced Monday that the Nigerian military had discovered the location of the nearly 300 girls abducted by the jihadist group Boko Haram.

However, he said there were no plans to rescue them, because Boko Haram would certainly kill them all should any such attempt be made: “we can’t go and kill our girls in the name of trying to get them back.” Negotiations to trade them for imprisoned Boko Haram members, meanwhile, have broken down. So, at this point the girls and their families have little hope — even these options of killing or ransoming them are delineated by the Koran and Islamic law.

Islam’s holy book directs Muslims to wage war against unbelievers, killing them by beheading and taking captives who may be freed or ransomed: “Now when ye meet in battle those who disbelieve, then it is smiting of the necks until, when ye have routed them, then making fast of bonds; and afterward either grace or ransom till the war lay down its burdens” (47:4). It also refers to slave women belonging to the Islamic prophet Muhammad as spoils of war: “O Prophet! Lo! We have made lawful unto thee thy wives unto whom thou hast paid their dowries, and those whom thy right hand possesseth of those whom Allah hath given thee as spoils of war” (33:50).

Islamic law has elaborated from these passages four options for the treatment of captives: “As for the captives, the amir [ruler] has the choice of taking the most beneficial action of four possibilities: the first, to put them to death by cutting their necks; the second, to enslave them and apply the laws of slavery regarding their sale and manumission; the third, to ransom them in exchange for goods or prisoners; and fourth, to show favor to them and pardon them. Allah, may he be exalted, says, ‘When you encounter those [infidels] who deny [Islam] then strike [their] necks’ (Qur’an sura 47, verse 4)” (Abu’l-Hasan al-Mawardi, The Laws of Islamic Governance).

The first of these options, putting captives to death, is such a live possibility that it is stymieing a rescue operation; as for exchanging them, Boko Haram leader Abubakar Shekau offered to exchange the girls who have refused to convert to Islam (90% of the abducted girls were Christians) in return for Boko Haram prisoners held by the Nigerian government. Regarding enslaving them, Shekau has gloated in a video: “I abducted your girls. I will sell them on the market, by Allah…There is a market for selling humans. Allah says I should sell.” That is in line with the option of enslaving captives. It has also been reported that they were sold off to Boko Haram members for $12.45 each, and then forcibly married to them — in accord with the Qur’an’s allowance of the sexual enslavement of “what your right hands own” who were taken as spoils of war:


The twentieth-century Koran commentator Maulana Bulandshahri explains the wisdom of this practice, and longs for the good old days:

During Jihad (religion war), many men and women become war captives. The Amirul Mu’minin [leader of the believers, or caliph — an office now vacant] has the choice of distributing them amongst the Mujahidin [warriors of jihad], in which event they will become the property of these Mujahidin. This enslavement is the penalty for disbelief (
kufr).


He explains that this is not ancient history: