Twilight of the Birdbath Saint 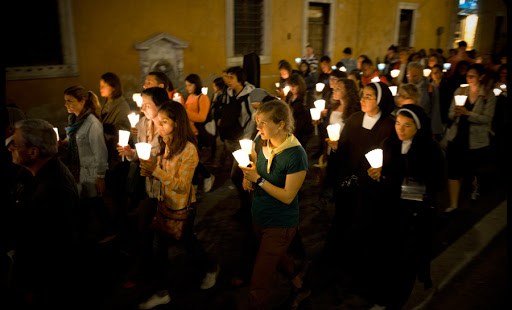 Real sanctity is all rather messy and time-consuming. Or, it used to be.

Of all the vacuous and self-congratulatory platitudes ever uttered by well-intentioned men, few outrank the pseudo-Franciscan epigram, "Preach the Gospel always. Use words if necessary." This misattributed directive has the effect of turning the Povorello of Assisi, his memory already distorted into that of a sort of Yoda-like Zen master who imparted cryptic tidbits of wisdom upon his intellectually dull brethren. Did he not suffer enough by bearing the wounds of his Lord and Savior on his body?

This inaccurate distillation of St. Francis does a disservice not only to the saint himself, but also to his spiritual children Sts. Anthony and Bonaventure, both of whom are counted among the Doctors of the Church. So too does it distract from the great philosophical crisis of nominalism stemming from the pen of the English Franciscan William of Ockham. Ideas, the philosopher Richard Weaver observed, have consequences, and so do the words used to express them.

Man, made in the image and likeness of God and endowed with both reason and free will, is given the ability to speak and the power to name things, and thereby to participate in Creation. The significance of names cannot be overstated: the Old Testament consistently shows us that to have one’s name live on through one’s children is a blessing, while to die childless and to have one’s name forgotten is a curse. Occasionally we encounter people in the Sacred Scriptures who are so important that God himself names them: Abram is to be called "Abraham," Jacob is to be called "Israel," the Baptist is to be called "John," and the Lord, the Word-Made-Flesh Himself, is to be called "Jesus." Later in the Gospels, we see Jesus give Simon the new name "Peter."

The Word. "It was through him that all things came into being, and without him came nothing that has come to be," St. John tells us. Our faith is one in which God revealed Himself through history by "speaking to us in many ways and by many means" (Hebrews 1:1) and then in time through His Son. The prophets tell us over and over again, "Thus says the Lord" and the Gospels tell us, "Jesus said to his disciples." Without words, without the Word, our faith is empty, unintelligible, and doomed to obscurity.

Now, to revisit the aphorism, we see it can be construed as a sly attempt at separating "words" from "action," or perhaps "faith" from "works,"or perhaps, more ominously, "truth" from "love."

In this latter scenario, then, we see a comfortable Francis — the birdbath St. Francis — who stands mutely in our weed-choked gardens, silently endorsing us in our mediocrity so long as we recycle and take our pets to be blessed at a church on his feast day. We like this clichéd St Francis in the same easy and unthinking way we like the St. Nicholas who is there to offer a Coke and a smile after a busy day of "holiday" shopping at the mall; or the pastel-painted St. Therese whose "Little Way" is distilled into the "Easy Way"; and the St. Patrick who showed us how to add green food coloring to cheap beer.

We like all of these because the alternative is somewhat horrifying; we wish for sanctity to be a form of retirement planning, something we don’t actively think about day in and day out, but rather something that we have earned by virtue of our being "good people." The St. Francis of poverty, of prayer, of the Stigmata is all rather messy and time-consuming.

The world has changed, or more accurately, it has once again shown us the true state of things: in an irrational and violent world, words are action. Such is the case with martyrs throughout the history of the Church; to confess the name of Jesus as Lord is to invite "sister death" (to use the evocative phrase of St. Francis): it was for the thirteen Spanish Trappist monks during the 1930’s who were tied to heavy weights and thrown into the Atlantic Ocean by anti-Church forces in the Spanish Civil War. Such is the case now for Christians in Syria, in Egypt, in Nigeria, and countless other lands.