U.S. Marine Jailed in Mexico Sustained by Faith in Christ 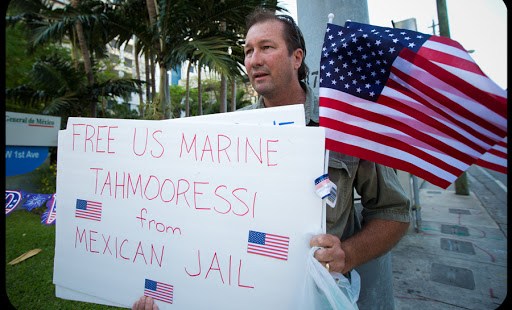 Andrew Tahmooressi reads the Gospel and the psalms while incarcerated.

Jill Tahmooressi was leaving a July 4 church service in 2008 when her teenage son, Andrew, told her something remarkable.

"He told me, ‘God just nudged me. He told me to join the military,’" Jill Tahmooressi said.

Andrew Tahmooressi motivated young man who by age 19 already had a private pilot’s license and worked as an Alaskan commercial fisherman, went on to enlist as an infantryman in the United States Marine Corps. He served two combat tours as a machine gunner in Afghanistan, where he was given a meritorious battlefield promotion to sergeant.

"He was definitely a serious Marine who served honorably," Jill Tahmooressi said. "Andrew was always a highly committed and very generous young man whose faith in God was very important to him."

Andrew Tahmooressi, 25, who was raised Catholic, now relies on his faith in Jesus Christ while he is held in a Mexican prison. He is awaiting the outcome of a criminal case where he was arrested for crossing the border with three legally-registered firearms in the back of his pickup truck.

Tahmooressi said he took a wrong turn when he ended up at the Mexican port of entry near Tijuana on March 31. He called 911 to report he had gotten lost and to ask for help, but Mexican authorities immediately arrested him.

"His rights were violated in so many ways from the very beginning," Jill Tahmooressi said.

According to his family and friends, Tahmooressi was beaten, stripped naked and threatened with death while in Mexican custody. He was in such fear that he tried escaping from the first prison where he was incarcerated.

"Coming from a combat veteran, for him to say that he had never been so scared in his entire life, and knowing the things that have scared us before, to hear him say that was just unbelievable," said Mark Podlaski, a former Marine who served with Tahmooressi in Afghanistan.

Tahmooressi’s Christian faith is what has sustained him during his ordeal.

"He’s maintained his belief in Christ, which is what keeps him being able to go through the day without going into a sheer panic," Jill Tahmooressi recently told Aleteia from her South Florida home.

Jill Tahmooressi said her son has a Bible and a copy of Pastor Rick Warren’s The Purpose Driven Life inside his cell at the El Hongo penitentiary in Baja California. He likes to pray over Psalm 91 and Ephesians 6, where St. Paul exhorts the faithful to be strong in the Lord and to put on the full armor of God.

"We’re prayerful that this journey is all for some higher purpose, for some higher calling," Jill Tahmooressi said. "We’ve been definitely battling the devil from the moment Andrew was first questioned by a customs agent."

Pastor Luis Benito, a pentecostal preacher in Tijuana, visits Andrew Tahmooressi two to three times a week to pray with him.

"He loves the psalms," Pastor Benito said. "He has a very strong and positive relationship with the Lord."

Tahmooressi committed his life to Christ "many years ago," said Bart Santos, a private investigator who is a member of the same Brazilian nondenominational church, Projeto Vida Nova, that Tahmooressi began attending shortly after he moved to San Diego earlier this year.

"He’s a godly man, very calm and easy-going, not the kind of person who would ever consider doing a crime," said Santos, who has also been investigating Tahmooressi’s gun arrest. Santos told Aleteia that he has worked about 125 hours on the case.

"This is essentially a case about a wrong turn," Santos said.

Earlier this year, Andrew Tahmooressi moved to California to receive treatment for post traumatic stress disorder. He began exhibiting symptoms shortly after he finished four years of active duty in 2012. A Marine Corps friend in San Diego helped Tahmooressi sign up for a treatment program there administered by the U.S. Department of Veterans Affairs.