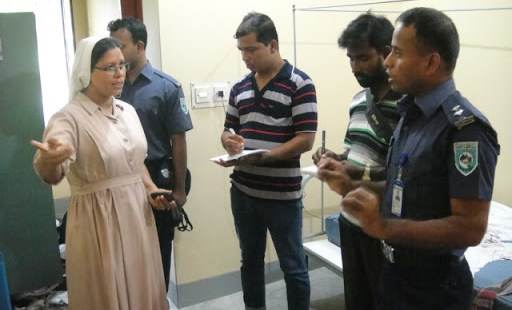 A “brutal” attack on nuns in Bangladesh—said to be the first of its kind in the country—has been condemned by the bishop of the diocese.

Following reports that sisters from the Pontifical Institute of Foreign Missions were violently assaulted, Bishop Sebastian Tudu of Dinajpur spoke to the Catholic charity Aid to the Church in Need about the incident.

The bishop reported that up to 60 armed men targeted the Catholic mission in Boldipukur on July 7 at 2 in the morning, attacking the presbytery, the convent and the hospital.

“The attack was massive and lasted about an hour and a half. The attackers brutally beat the nuns," Bishop Tudu said. "At the moment the nuns are in Dhaka [the capital] for medical treatment."

He said the door to the presbytery was broken down, and the pastor was threatened and robbed. "The convent was seriously devastated. Only when the police arrived did the attackers leave the mission,” Bishop Tudu said.

Twelve men reportedly have been arrested in connection with the assaults. Police are investigating.

According to Bishop Tudu, this is the first time sisters in Bangladesh have been attacked in this way.

Bishop Tudu said: “It’s unprecedented because nuns are highly respected in Bangladesh. The attack is obviously a targeted and planned attempt at intimidation."

But he described growing attacks against Christians in the diocese over the last year, including violence against villages where Catholics live. He asserted that nuns and priests are being attacked "because they stand up for the disadvantaged and minorities.”

The bishop added: “A seminary and the seminarians were also attacked. It was always said that the reasons for the attacks had to do with disputes over land and property.”

The seminary has now been moved to another diocese.

Church reports suggest that the latest incident was also motivated by an attempt to steal the sisters’ land deeds or other property deeds left with them for safekeeping by poor and illiterate locals.

According to the bishop, the 45 priests and more than 100 sisters working in the diocese are now afraid of further reprisals.

Courtesy of Aid to the Church in Need, an international Catholic charity under the guidance of the Holy See, providing assistance to the suffering and persecuted Church in more than 140 countries.