The Crisis in Ukraine: An Interview with Sergei Khrushchev 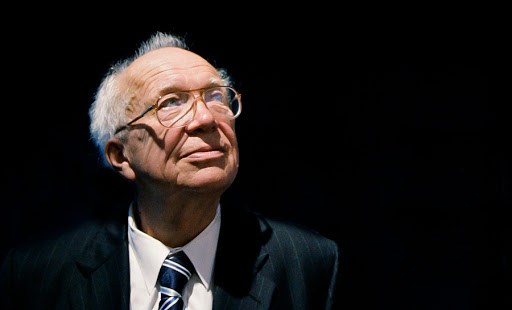 AP Photo/M Spencer Green
Dr. Sergei N. Khrushchev, son of former Soviet Prime Minister Nikita Khrushchev, views a replica of Sputnik I on the 50th anniversary of the launch of the Soviet satellite during a special tour of the the Adler Planetarium's exhibit "Shoot for the Moon" Thursday, Oct. 4, 2007, in Chicago. (AP Photo/M. Spencer Green)
Share
Print
William Van Ornum - published on 07/21/14

Nikita’s son talks about the Malaysia Airlines Flight 17, Crimea, and whether we’re headed for a new Cold War.

“It is a very dangerous situation,” said Sergei Khrushchev, reflecting upon what has been happening in Ukraine. “The West controls the Kiev government, and Russia controls the eastern Ukrainian rebels. It is very difficult to control, because they are all Ukrainians, and they are fighting with each other.”

Khruschev’s words are important for several reasons. He is perhaps the last surviving member of the participants in the 1962 Cuban Missile Crisis, so he has seen first-hand Russian and American leaders solve a deadly problem. As a young missile engineer and confidante of his father, he was in the Russian control center when President Kennedy and Nikita Khrushchev found a way to solve the Cuban Missile Crisis.

After the Soviet Union broke apart, he became an American citizen, and with a doctorate in history, taught as a distinguished professor at Brown University. He has written highly praised books, such as Nikita Khrushchev and the Creation of a Superpower. He is also the author of his father’s multi-volume memoirs. The primary sources of his father’s writings that led to the writing of this multi-volume history, Memoirs of Nikita Khrushchev, were smuggled out of Russia soon after Khrushchev left power.

In an interview Sunday, I asked Sergei Khrushchev, “Is there a way for the parties involved in Ukraine or in Crimea right now to develop some sort of compromise or way for the different sides to save face?” (Nikita Khrushchev withdrew the missiles from Cuba on the basis of a little known promise by President Kennedy to remove American missiles from Turkey.)

“No, certainly not,” said Khrushchev.

“The Cuban missile crisis involved land that was far away from both Russia and the United States. Now it involves the very territory of Russia.

You have the Americans controlling Kiev and Russia controlling eastern Ukrainian rebels, but it is very limited control, for they are all Ukrainians, and they are fighting with each other. They will not do everything you want them to do, They do what they want to do.

I think Russia and the United States should work together try to calm down this country. Now we are working on opposite sides, and this is a very bad sign.”

After the crash of the Malaysian jetliner, there has been a brief lull in the conflict between more than a few military powers–perhaps a constructive sign and an indication that the 100-year anniversary of World War I is causing everyone to reflect and not act hastily. Khruschev believes that the downing of the Malaysian plane is not a game-changer in this conflict, however, because both sides are trying to use the issue to their own advantage.

“We don’t know if the rebels have any of these missiles. … So we cannot say who did this,” he asserted.

When asked about the personalities of the current and former U.S. president, Khrushchev said:

“I think we need the right president, because the last president, George W. Bush, brought us the war problems. Now Obama brings a different kind of problems. We need somebody who will think, ‘What is the interest of the United States–what do we have to do?’ Not to punish Putin or leaders of any other states. What we need to do is to think of the prosperity of the United States. This is our problem, because most of our presidents think how to punish some other leaders, but not how to make prosperity for our own people.”

Khrushchev believes in the dynamic between European leaders, particularly those from Germany and Great Britain. He sees them as being more pragmatic about what is in their own countries’ best interests. They are trying not to be too pro-Russian or pro-American. They are pro-European, and they are trying to behave in the way that they think will be best for their own countries.