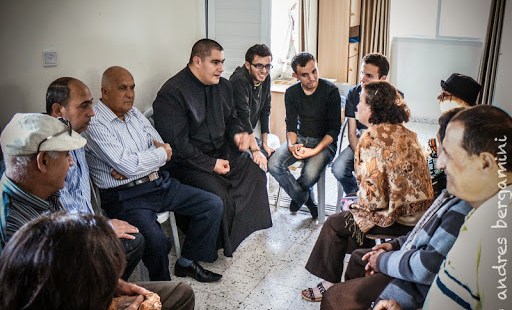 Muslims are the majority who have taken shelter in Christian schools and hospitals.

Almost 1,300 Palestinians, the vast majority of whom are Muslims, have taken shelter in the Greek Orthodox Church of St. Porphyrius in Gaza in order to escape Israeli bombing. Another 700 have found refuge in Holy Family Catholic Church.

Caritas Jerusalem is responding to the emergency situation of more than 130,000 displaced people in the midst of the Israeli military "Protective Edge" operation. Healthcare facilities in the Gaza Strip are unable to cope with the huge amount of casualties.

Father Raed Abusahliah, director of Caritas Jerusalem, told Fides Agency, told Fides it has 18 "operators" working in the area, with "mobile medical centers that operate in schools and distribute survival kits to families massed in schools, in collaboration with the United Nations."

But not all scools are safe havens. Palestinian officials said that Israeli tank shells hit a compound housing a U.N. school in the Gaza Strip today, killing at least 15 people and wounding dozens who were seeking shelter from fierce clashes on the streets outside, AP reported. The Israeli military, which pressed forward with its 17-day war against the territory’s Hamas rulers, said it was reviewing the incident and suggested Hamas rockets may have been to blame, although it offered no proof.

Dozens of other people also were killed in a day of heavy fighting throughout the coastal territory, raising the overall Palestinian death toll in the conflict to at least 788, Gaza health official Ashraf al-Kidra said. Israel has lost 32 soldiers, all since July 17, when it widened its air campaign into a full-scale ground operation. Two Israeli civilians and a Thai worker in Israel have also been killed by rocket or mortar fire.

With the number of casualties growing on both sides, the international community has stepped up diplomatic efforts to broker a cease-fire. But Hamas is insisting on the lifting of the 7-year-old blockade, which was imposed when the Islamic militant group seized control of Gaza from the Western-backed government of Palestinian President Mahmoud Abbas. Israel says the war is meant to halt rocket fire from Palestinian militants in Gaza and destroy a sophisticated network of cross-border tunnels.

Israel imposed the blockade in 2006 after Hamas and other militants abducted an Israeli soldier in a deadly cross-border raid. It tightened the siege in 2007 after Hamas seized power from forces loyal to Western-backed Palestinian President Mahmoud Abbas, but had eased some of the restrictions in recent years.

Egypt tightened its own restrictions last year after the overthrow of a Hamas-friendly government in Cairo and has destroyed many of the cross-border smuggling tunnels that sustained Gaza’s economy, and which were also used by Hamas to bring in arms.

U.S. Secretary of State John Kerry spent the day in Cairo feverishly calling on regional leaders to help push Israel and Hamas agree to a cease-fire as a necessary first step toward resolving some their long-standing mutual grievances.

As in years past — most recently in 2012 — the U.S. wants the violence to stop before it tries to negotiate specific demands each side has put forward. For Hamas, that includes the release of Palestinian prisoners in addition to the end of the economic blockade against Gaza.

Kerry did not make any public appearances on Thursday as he called foreign ministers in Turkey and Qatar — who have influence with Hamas — and Netanyahu to try to press a solution. Like Israel, the U.S. considers Hamas a terrorist organization and will not directly engage with its leaders.

State Department spokeswoman Jen Psaki said Thursday’s attack on the U.N. school "underscores the need to end the violence and to achieve a sustainable cease-fire and enduring resolution to the crisis in Gaza as soon as possible."

"We call on all parties to protect these facilities from the conflict and we have condemned those responsible for hiding weapons in United Nations facilities in Gaza," Psaki added.

British Foreign Secretary Philip Hammond, meanwhile, urged Hamas to agree on an immediate humanitarian cease-fire and said Israel and Palestinian Authority could then come together to hold talks.

"Hamas must agree to a humanitarian cease-fire without preconditions for the sake of the people in Gaza," he said during a news conference after meetings with Egyptian officials in Cairo.

Israeli Prime Minister Benjamin Netanyahu, however, made no reference to the cease-fire efforts in underscoring his determination to neutralize the rocket and tunnel threats.

More than 2,000 rockets have been fired at Israel from Gaza since July 8, and the Israeli military says it has uncovered more than 30 tunnels leading from Gaza to Israel, some of which have been used by Hamas to carry out attacks.

"We started this operation to return peace and quiet to Israel… And we shall return it," Netanyahu said after meeting with Hammond earlier Thursday in Israel.

In other violence, six members of the same family and an 18-month-old infant boy were killed when an Israeli airstrike hit the Jebaliya refugee camp early Thursday, according to Gaza police and health officials. Another airstrike on a home in the southern Gaza town of Abassan killed five members of another family, al-Kidra said.

Heavy fighting was reported along the border of central Gaza, according to Gaza police spokesman Ayman Batniji. Israeli troops fired tank shells that reached parts of the Bureij and Maghazi refugee camps, although no injuries were immediately reported. Clashes also erupted between Palestinian fighters and Israeli troops in the northern town of Beit Lahiya, Batniji said.

Israeli naval vessels meanwhile fired more than 100 shells along the coast of Gaza City and northern Gaza, the spokesman said, adding that rescue teams were unable to operate in the area because of the heavy fire.

Next Saturday and Sunday in all parishes in Jordan, Palestine and Israel the faithful will pray for the return of peace and there will be fundraising on behalf of the people of Gaza. "In this regard," said Father Raed, "I launch a humble appeal to Pope Francis: may you convene a vigil of prayer and fasting for peace in the Holy Land, as you did for Syria. All the people who inhabit this land, the land of Jesus, are tired of living in fear and pain."