The Glow in the Dark Rosary 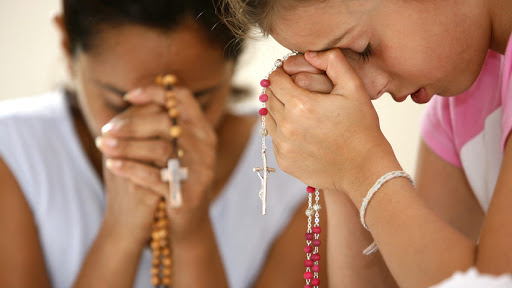 Lights that guide us to each other.

I was completely settled down into bed when my husband asked, “Did you remember to pack your Rosary?”

Dangit. I hadn’t remembered, and so I carefully treaded my way through pitch-black Lego fields to get to our Rosary bowl, where all the family’s Rosaries were stored in a horrifying jumble. In the dark, I felt for mine, untangled it, and tiptoed back upstairs, unzipping my suitcase and carefully storing the Rosary within.

Years and years ago, before we were married, my husband expressed his fear of flying to a woman he worked with, a woman who put in eight hours at a UAW job by day, and then an additional eight hours by night, as an “exotic dancer.”

“You’re scared of flying?” the woman told my future husband. “Then you have to fly with a Rosary. Mary will protect you,” and she pressed a cheap plastic, glow in the dark Rosary into his hands. It was bewilderedly accepted by a man who was not at the tine Catholic, but was nonetheless willing to submit to the strength of conviction in this woman’s voice.

We still have that glow in the dark Rosary. We (perhaps unkindly) call it “the Stripper’s Rosary” and pray for that amazing woman every day. Every time my husband goes on a business trip, he packs a Rosary, either that specific one, or another, and on the eve of my trip, he remembered to tell me to bring mine. That’s how important it has become to him.

Then came takeoff. As the shockingly fragile heap of metal hurled itself down the runway, gathering enough speed for it to defy the laws of gravity and actually lift hundreds of people into the sky, I grabbed my Rosary. I looked out the window at the rapidly shrinking houses as I started the prayers, “I believe in God, the Father Almighty, Maker of Heaven and Earth … .”

When I was young, and the car I was in would stop at a traffic light, I used to look around at the faces in the cars surrounding me. I’d be suddenly struck by the unbearable fact that each of those faces belonged to a person who had a whole life separate from mine. That they were going to get their green light and go to a home I’d never seen, and tend to a family I didn’t know, and that there was this huge net of people around me whose lives intersected with mine in ways I’d never comprehend.

But to my child’s mind, that thought wasn’t frightening. Rather, it was amazing and exciting, wondering how God would bring all those strands of strangers’ lives into contact with my own small world, and how I could impact theirs.

As I grew up, however, that sense of excitement faded, and I stopped looking at the faces of those around me at traffic lights and grocery stores and all the dozens of places I met my fellow man en masse.  Instead, I willingly narrowed my focus to the people living under my roof, and those that I’d forged satisfactory enough relationships with to “deserve” my prayers.

But suddenly, there I was, suspended over whole subdivisions, whole towns, from an amazingly improbable perspective. Fearful of the act of takeoff, I grabbed my Rosary, and wound it around my hand. As I started saying the prayers, I looked down over the houses and schools and businesses I was seeing from higher and higher heights: “Bless them, Lord,” was the prayer I found bubbling on the surface of my heart. I looked over whole neighborhoods, and the thought of the mothers and fathers and children and singles and elderly and sick and struggling below me unexpectedly filled me with a sense of community.