Away with the World, Let Heaven Enter 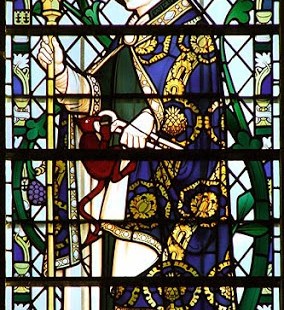 Beautiful music can detach our hearts from worldly cares and lift them heavenward.

In 1858, Blessed John Henry Newman published a magnificent essay called “The Mission of St. Benedict,” which I highly recommend in its entirety. There are many colorful passages about different figures in the Benedictine tradition. At one point Newman is speaking of St. Dunstan:

He had a taste for the arts generally, especially music. He painted and embroidered; his skill in smith’s work is recorded in the well-known legend of his combat with the evil one. And, as the monks of Hilarion joined gardening with psalmody, and Bernard and his Cistercians joined field work with meditation, so did St. Dunstan use music and painting as directly expressive or suggestive of devotion. “He excelled in writing, painting, moulding in wax, carving in wood and bone, and in work in gold, silver, iron, and brass,” says the writer of his life in Surius. “And he used his skill in musical instruments to charm away from himself and others their secular annoyances, and to rouse them to the thought of heavenly harmony, both by the sweet words with which he accompanied his airs, and by the concord of those airs themselves.”

Now let us consider calmly what is being said here. Newman is praising Dunstan not just for the quality of his sacred music, but rather, for his use of the art of music simply speaking. The saint “use[d] music and painting as directly expressive or suggestive of devotion.” I believe there is a quite striking claim in this sentence: that the fine arts, of their very nature, are capable of expressing or suggesting to the soul the right attitude or relationship it should have with God. Naturally, this also means that they are capable of doing the opposite; and it is not at all clear to me that they are capable of being neutral, neither favoring nor hindering devotion.

Moreover, his biographer tells us that Dunstan used his skill in musical instruments―here, again, we are not in the world of unaccompanied plainchant for Mass or the Divine Office, but rather, looking to the effect of instruments played recreationally―to do two things, one negative and one positive. First, by his music he would “charm away from himself and others their secular annoyances.” Let us be terribly honest with ourselves. Is not much of our life in the world an annoyance to the spirit? We are constantly fighting the world, the flesh, the devil; it is hard going, an uphill battle, a steep climb, an unremitting campaign. Our path to heaven is strewn with obstacles, beginning with our own sins, and the temptations thrown at us to indulge in them. From time to time, we need the refreshment of losing ourselves in something peaceful and pacifying, beautiful and beautifying―something that exists for its own sake, just because it is good, like God. The world will always be with us while yet we draw breath; but its annoyances can be chased away for a blessed moment by the power of music.

That is not all; the best is yet to come. By his music, St. Dunstan would “rouse them to the thought of heavenly harmony.” Ah, the thought of heaven and its eternal harmony, where God’s will is ever done, and, for that very reason, every saint and angel is profoundly happy, resting in His ineffable sweetness, beauty, and glory! That goal should be the Christian’s mainstay in this valley of tears. We are being told that Dunstan’s music actually contained something of that goal in its “sweet words” and the “concord” of the airs or melodies. It is as if a little of heaven were present in his music, the way a person is already present when you hear his voice from a distance, even if he himself is not yet arrived. We see here a lofty saintly standard for all of our music. We learn about the true vocation of the musician, which is to elevate our sore, wounded, earthbound minds to sempiternal vistas of light, and even to set what is dark and difficult in the radiance of the light.