Mary’s Gourmet Diner the Target of an Attack 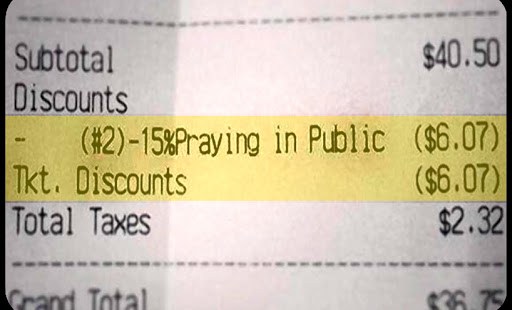 The “praying in public” discount ends, proving that no good deed goes unpunished.

On Wednesday, Aleteia published two articles on topics related only by their proximity on the webpage. One, The Diner Receipt that Went Viral, was a feel-good story about Mary Haglund’s long-standing policy at Mary’s Gourmet Diner of letting servers (at their own discretion) deduct 15% from a diner’s tab as a ”praying in public discount” for those who offered thanksgiving before tucking into their meal. It was a heart-warming story affirming the “attitude of gratitude” (as Mary explained in a TV interview) and the author, Marge Fenelon, talked about the benefits of quiet public prayer—including that of making God more present in the world.

The other, The IRS Monitors Sunday Sermons, reports rather alarming news that the Freedom from Religion Foundation (FFRF) declared victory in its lawsuit with the IRS, having reached a secret settlement agreement with assurances that the IRS will be carefully monitoring and punishing violations of “prohibited” political speech by clergy.

What’s the common denominator? Church-restaurant. Pastor-diner. Sermon-laypeople saying Grace. Something having to do with faith, right? Well, unfaith, to be exact.

Now that the Freedom from Religion Foundation is satisfied that the IRS will crack down on pastors whose moral teaching may involve real life practical applications in areas like abortion and same-sex marriage (thus seen as political for favoring the GOP over Dems), the organization has turned its attention to Mary’s Gourmet Diner. Apparently, they’ve never heard the legal axiom "De minimis non curat lex" (The law doesn’t concern itself with trifles.)

Mary—who intended only to quietly show her appreciation to diners who were showing THEIR gratitude to ANY God in ANY manner for being able to enjoy a decent meal when much of the world is starving—THAT Mary, received a letter from the FFRF. It alleged that her small acts of kindness in the restaurant she owns violated federal law. The implication being that if she didn’t cease and desist her illegal activity, she could face a costly and burdensome lawsuit.

Mary capitulated. What choice did she have? The threat was real. FFRF boasts that it is currently in litigation in a similar case in Rhode Island and claims to have pursued a successful action “before a civil rights agency in Milwaukee.” They also boast of 21,000 supporters in the United States, including over 500 atheist-supporters in North Carolina.

The alleged grounds for an action are given to be the following section of the federal Civil Rights Act:  “All persons shall be entitled to full and equal enjoyment of the goods, services, facilities, privileges, advantages, and accommodations of any place of public accommodation … without discrimination on the ground of race, color, religion, or national origin.” 42 U.S.C. §2000a(a). Diners, restaurants and the like fall, of course, under the definition of “public accommodation.”

“It does not matter that the promotion is available to customers regardless of which god they pray to. Your restaurant’s restrictive promotional practice favors religious customers, and denies customers who do not pray and nonbelievers the right to “full and equal enjoyment” of Mary’s Gourmet Diner. Any promotions must be available to all customers regardless of religious preference or practice on a non-discriminatory basis.”

Mary Haglund certainly thought she was being accommodating. Discounts were handed out to people who showed gratitude for their meal (“even just a thanks” she explained). She didn’t discriminate by favoring one religion over another. No one ever bothered to check the content of anyone’s prayers. Silent meditation qualified, too.

If an atheist just sat down and shut up for a few seconds, he might also have been rewarded with a discount.