The Demise of Dating and the Loss of Innocence 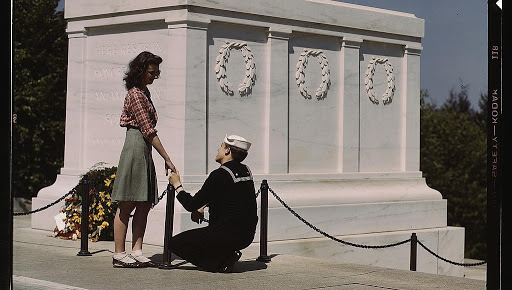 Library of Congress
A marriage proposal tradition that never gets old.
Share
Print
Msgr. Charles Pope and Archdiocese of Washington - published on 08/12/14

I’ve pondered with you before on this blog (HERE) the disappearance of something we used to call “dating,” wherein a young man would summon the courage to ask a young lady out to dinner or perhaps to the movies. He would do something called getting “dressed up,” go to the young woman’s house, often meet her parents, take her out for the evening, and then return her home at a respectable hour.

Dating was something that one did beginning in late high school or in college. Youth too young to date were often encouraged by adults to meet one another, and so the adults often sponsored dances and other social activities for young men and women to meet, learn to dance, and interact socially. All this was in service of something we used to call “marriage,” a term that has lost any real meaning in the general culture over the past fifty years. It used to mean (and still does in the Church) the lifelong, stable union of one man and one woman for the purposes of having a family and raising children. In the general culture today it really means little more than two (and soon to be two or more) adults consorting for as long as they please, for whatever purposes they please, until it makes them happier to no longer do so.

With the demise of marriage also came the demise of dating, which existed to serve marriage and to provide opportunities for younger men and women to meet and eventually marry.

As I pondered the disappearance of dating with you some months back, I was surprised at the the sad and sometimes bitter or cynical remarks that came in the comments box. Clearly there is a significant undercurrent of bitterness, cynicism, and lack of trust between the sexes. So many young men wrote in, with great anger at times, about how they are treated by young women, who seem to see them as predators and as somehow beneath them. Many young women confirmed this by describing men as immature and not interested in anything but sex. The overall climate seems to be deeply imbued with a poisonous cynicism and even an open hostility between the sexes.

In a certain sense we see today an age of lost innocence. Gone are the days of idealistic young men and women venturing out to find a spouse, excited at the prospect of marriage, family, and future. Now, because of divorce rates unimaginable fifty years ago, idealism has been replaced by cynicism. And with the explosion of easily accessible pornography, sexual innocence is lost very, very early. Almost no young people these days think ahead to a blissful wedding night and having their first experience of sexual intimacy there.

Yes, it is an age of lost innocence. The word “innocence” is from the Latin  in (not)  + nocens (harmful or noxious). Thus in seeing someone as innocent, we presume that they mean no harm. But in cynical and jaded times like these, fewer and fewer people presume innocence on the part of anyone. A young man can barely take notice of a woman’s beauty, let alone tell her she’s beautiful, without being suspected of predatory sexual advances. He might even get sued or lose his job if he does so in the workplace. A woman cannot be even subtly flirtatious without fearing significant pressure to go very far, very fast with someone she might just like to get to know slowly.

Almost no one presumes innocence anymore and to do so is scoffed at as naïve. So cynical and jaded have we become, that we even ridicule the notion that there ever was an innocent time when men and women generally observed chastity, and within those safer boundaries, were able to speak more freely of their interest in one another and relate at more subtle levels than all-or-nothing sex.