The Kairos of Robin Williams 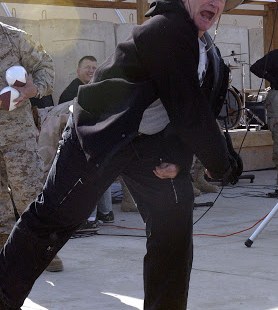 Suicide, depression, Church teaching and the chance for redemption.

The death of a celebrity, especially one whose body of work was genuinely compelling, can offer important lessons for the rest of us. The death last February of Philip Seymour Hoffman has become a cautionary tale about the profound profligacy of addiction. The passing last month of the Catholic theologian and writer Stratford Caldecott, who succumbed to cancer at the age of 60, reminded us yet again that the rain falls on the just and the unjust alike, and that life and death are finally mysteries known only to God.

The death of the comedian and actor Robin Williams [pictured entertaining US troops in Iraq in 2004] will offer lessons, too. Here was a man most of us associated with joy and certainly with laughter. Yet Williams’ relentlessly manic persona masked a lifelong struggle with depression, one that drove him to alcohol and drug abuse, and finally to suicide. Those who watched closely could detect the sadness at the core of Williams’ life and art, from the desperate longing of Chris in “What Dreams May Come,” to the heartbroken psychologist Sean Maguire in “Good Will Hunting,” to the claustrophobic pathos of Sy Parrish in “One Hour Photo,” and the grief-driven fantasist Parry in “The Fisher King.”

If nothing else, the death of Robin Williams is an object lesson in the destructive power of depression. The National Institute of Mental Health (NIMH) estimates that one in ten Americans will suffer from clinically diagnosable depression at some point in their lives. And while scientists suspect that there is a genetic component – likely linked to lower levels of the “feel good” neurotransmitter serotonin – there is no doubt that environmental factors play a part, especially unemployment, divorce, poverty and other illnesses. Among age groups, people 45 to 64 are the most likely to be depressed, but women are twice as likely as men at any age.

The link between depression and suicide is well known. An estimated 90% of people who commit suicide suffer from depression, addiction or both at the time of their deaths. Recently, the United States has seen a dramatic spike in the rate of suicide among returning veterans of the Iraq and Afghanistan Wars. According to VA records, 1,900 veterans – 22 per day – committed suicide during the first three months of 2014 alone. According to the American Foundation for the Prevention of Suicide, nearly 40,000 Americans committed suicide in 2011, the last year for which there are complete statistics. Heart disease and cancer may be the leading causes of death in the United States, but there is something uniquely tragic about suicide, especially when committed by a young person suffering from a condition beyond his or her control.

It is important for Catholics to know that as the Church’s understanding of depression has evolved along with advances in psychology and medicine, so has her understanding of the moral implications of suicide. The Catechism of the Catholic Church (CCC) makes clear that, objectively, suicide is still a serious sin: “Suicide contradicts the natural inclination of the human being to preserve and perpetuate his life. It is gravely contrary to the just love of self. It likewise offends love of neighbor because it unjustly breaks the ties of solidarity with family, nation, and other human societies to which we continue to have obligations. Suicide is contrary to love for the living God.” (CCC #2281)  What has changed is our understanding of the effects of depression and addiction on mental competence.

We know that for a sin to be mortal, three things are required: the matter must be objectively grave, the act must be freely chosen, and it must be chosen with full knowledge. Suicide is obviously grave matter, but depression and addiction can have profound effects on free choice and knowledge. It is likely that many people who commit suicide were not mentally competent at the time and therefore not morally culpable for their acts of self-destruction. The Catechism alludes to this where it says, “Grave psychological disturbances, anguish, or grave fear of hardship, suffering, or torture can diminish the responsibility of the one committing suicide.