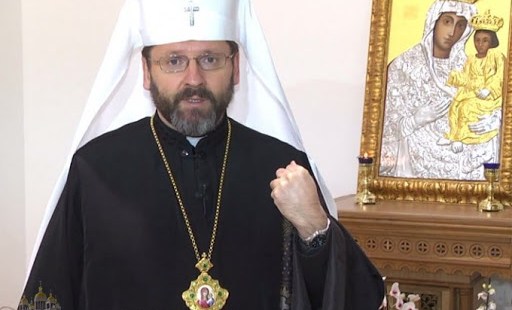 The head of the Ukrainian Greek Catholic Church outlined the persecution of Catholics and other religious groups in Ukraine and criticized the Russian Orthodox Church for echoing the Russian line on the situation in the east of the country.

Sviatoslav Shevchuk, Major Archbishop of Kyiv-Halych, said in a letter Friday that for months, Ukrainians have been on an "arduous pilgrimage from post-Soviet fear to freedom and God-given dignity.” He described the religious discrimination to which Churches and religious communities have been exposed in annexed Crimea and in the eastern war zone. Muslim Tatars have been especially targeted, while Greek and Roman Catholic ministries, Orthodox parishes of the Kyivan Patriarchate, and Jewish communities have also been menaced.

“Unfortunately, the beleaguered Ukrainian Catholics, Greek and Roman, faithful of the Ukrainian Orthodox Church of the Kyivan Patriarchate and Protestants in the east of Ukraine are further endangered by the rhetoric of the Orthodox leadership in Russia, which is becoming increasingly similar to the propaganda of Russian political authorities and media,” he said.

Statements from the Russian Orthodox Church, he said, have defamed and libeled Greek Catholics and Ukrainian Orthodox of the Kyivan Patriarchate. “They are held responsible for the military conflict in Eastern Ukraine and are accused of generating the warfare, especially the violence against Orthodox clergy and faithful endured as a result of military operations.” In his letter, Major Archbishop Sviatoslav “strongly rejects” those accusations.

The archbishop’s comments came as Ukraine prepared to celebrate Independence Day on Sunday and as tensions escalated  with neighboring Russia.

On Friday, Moscow sent 130 trucks into Ukraine, drawing a sharp rebuke from Kiev, which called it a "direct invasion." The U.S. and NATO condemned the move as well.

The trucks, part of a convoy of 260 vehicles, entered Ukraine without permission after being held up at the border for a week amid fears the mission was a Kremlin ploy to help the pro-Russian separatists in eastern Ukraine.

By late afternoon, trucks had reached the city of Luhansk, whose war-reduced population of a quarter-million people has suffered under intense fighting over the past several weeks between Ukrainian forces and the separatists.

The arrival of the trucks instantly raised the stakes in the crisis: An attack on the convoy could give Russia a pretext to intervene more deeply in the fighting.

And the convoy’s mere presence could block further battlefield advances by Ukrainian forces, which have reported substantial inroads against the rebels over the past week.

In sending in the convoy, Russia said it had lost patience with Ukraine’s stalling tactics and claimed that soon "there will no longer be anyone left to help" in Luhansk, where weeks of heavy shelling have cut off power, water and phone service and made food scarce.

Ukraine has long accused Russia of supporting and arming the rebels, a charge Russia denies. Yet NATO said Friday that, since mid-August, it has seen multiple reports of direct involvement of Russian forces in Ukraine.

It also said Russian artillery is being used against Ukraine’s forces, both from across the border and from inside Ukraine. In addition, NATO said it has seen "transfers of large quantities of advanced weapons, including tanks, armored personnel carriers and artillery, to separatists."

At the United Nations in New York, Russian ambassador Vitaly Churkin hotly denied any Russian troops were inside Ukraine.