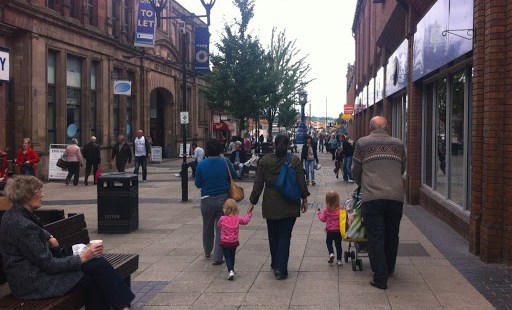 Why were girls in England repeatedly raped by Pakistani men and nothing was done about it?

Much ink has been spilled in recent days concerning the strife that innocent children – especially girls – are facing in war-torn areas around the globe.  In Nigeria, the Islamist rebel group Boko Haram continues to hold Nigerian schoolgirls as hostages and sex slaves. In Iraq, the Islamic State (or “ISIS”) has established the practice of buying and selling young Christian and Yazidi girls for the same purpose (having already murdered their fathers, husbands, and brothers). Islamist groups do not conceal their rationale regarding this practice: As “kuffar,” non-Muslim girls are considered to be spoils of war, and are used however their captors please.

Westerners are increasingly aware of – and outraged by – reports of this practice in far-off lands. What many do not realize, however, is that something similar may even now be taking place closer to home.

Last week, investigators in Britain revealed that, between 1997 and 2013, at least 1,400 girls were sexually exploited on an industrial scale in the English town of Rotherham (Population: 275,000). Those with a strong stomach should download the official report and read it.  Among other horror stories, it describes girls as young as 11 years old being gang-raped by large groups of men. Girls were also forced to witness brutal beatings and rapes and warned that they would suffer the same fate if they went to the authorities. Many of them were even trafficked to other areas in Northern England for a high annual profit.

One might ask, how could so much abuse occur over a long period of time without the authorities in Rotherham knowing about it?

The awful answer: They did know about it, and they did nothing.

As the report details, multiple victims repeatedly appealed to the police for help.  One victim even preserved her ruined clothing as evidence and brought it with her to the police station to strengthen her case. The police turned her away, and the clothes disappeared. Multiple investigations were similarly stalled, shelved, or otherwise aborted on different occasions over the past decade. But why? What reason would the authorities have to stall an investigation into something so obviously grotesque to any human being with a conscience? The answer, again, is deeply troubling.

Here is the reason: With some exceptions, the victims were mostly white, British girls. Almost all of the perpetrators, on the other hand, were Pakistani Muslim men.

Time and again, the report confirms this fact: Investigators and social workers looking into the abuse of children in Rotherham either stalled their investigations or were stopped by their superiors due to concerns that they would be accused of racism. When faced with the possibility that they might run afoul of political correctness for pointing out the race or religion of child rapists, British authorities elected instead to allow this massive sexual crime to continue unabated.  As she describes in the report, one investigator made note of the predominance of Pakistani males among the Rotherham abusers. For her trouble, she was ordered by her superiors to participate in a diversity training seminar and nearly fired.

Great Britain, the birthplace of Magna Carta, has become the sort of country where a person’s race and/or religion can give you a free pass to buy, sell, and exploit girls – but only if the girls are white. This passivity in the face of evil plays right into the hands of the abusers, whose motives are never discussed.  Why were the perpetrators “mostly Pakistani Muslims”? Can it be that there is something terribly wrong in the Pakistani Muslim community in Britain? Does this problem fit the pattern that we see with Boko Haram and the Islamic State and their buying and selling of non-Muslim girls?