The Road to Compostela—Keeping Company in Pursuit of God

Part 1 of A Pilgrimage Journal

There's no room for pride on the Camino de Santiago.

I learned that lesson quickly, little more than half an hour into the steep climb from St Jean Pied de Port to Orisson, the Pyrenean auberge that held the promise of a mid-morning coffee.  Heavy rain quickly forced me to unpack my lurid orange poncho, which I’d tested before leaving Dublin to ensure it fitted not merely me, but my rucksack.  It turned out that it only covered both man and bag when I was stationary. The moment I moved the cape rode up, inching its way up the bag to my shoulders, exposing both rucksack and flanks to the elements. 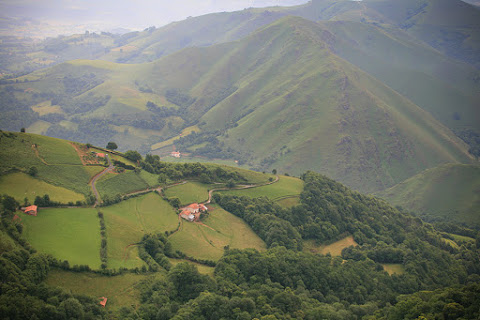 Miguel Ángel García
Starting to panic, with the rain getting heavier, I looked around through waterlogged glasses to see a Korean girl gesturing at me. From a pocket of her bag she produced some clothes-pegs, and with the help of Tony, the Australian with whom I was walking, she clipped my poncho into position. I have no idea if I ever saw her again – I could barely see her then – but her solution, and her clothes-pegs, would get me over the Pyrenees and eventually even past Santiago de Compostela to Fisterra on Spain’s Atlantic coast, the medieval end of the earth.