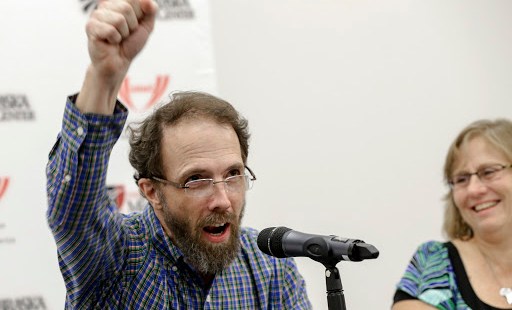 OMAHA, Neb. (AP) — After three weeks in isolation, an American doctor who contracted Ebola while working in West Africa says he’s grateful for the specialized care that allowed him to recover and remains concerned about the people he was trying to help.

Rick Sacra, 51, was released from the Nebraska Medical Center Thursday after the federal Centers for Disease Control and Prevention cleared him. He returned home to Holden, Massachusetts Thursday evening.

"The CDC has declared me safe and free of virus. Thank God! I love you all," Sacra said with a smile at a news conference as his wife and many of the people who cared for him since he arrived in Omaha on Sept. 5 watched.

Sacra asked for more prayers and practical help for the region where the outbreak is happening. The World Health Organization says the Ebola virus is believed to have killed more than 2,900 people in West Africa.

"Though my crisis has reached a successful end here, the Ebola crisis continues to spin out of control in West Africa," Sacra said.

Governments are scrambling to contain the disease outbreak, with the U.S. promising to send 3,000 soldiers to the region to help.

Sacra said it’s likely he will return to Liberia to help someday because he has many friends in the country where he lived for 15 years, but for now he has to focus on his own recovery.

"I feel great, except that I am extremely weak," he said.

Sacra can handle only about five minutes on an exercise bicycle before becoming fatigued, but he managed to energetically answer questions for more than half an hour Thursday. Sacra even offered a hearty "Go Big Red!" as he declared lifetime allegiance to the University of Nebraska Cornhuskers after his stay in the state.

Sacra said he’s not sure when he became infected with Ebola, but he was taking care of very sick pregnant women and delivering babies, including performing several cesarean sections. He had been working at a hospital in Liberia with the North Carolina-based charity SIM.

"Unfortunately, what we discovered is this epidemic is so widespread and the numbers are so high that sometimes people who don’t have the classic symptoms that you’re looking for — that the WHO (World Health Organization) was training us on

Sacra was able to share a hug with his wife of 29 years for the first time in roughly two months on Thursday morning. "It was great to get a hug," said Debbi Sacra, who spent most of the news conference watching her husband.

— including Sacra’s friend Dr. Kent Brantly — have recovered and been released from Emory University Hospital in Atlanta. A fourth American with Ebola is still being treated in Atlanta.

Dr. Phil Smith has said Sacra received an experimental Tekmira Pharmaceuticals drug called TKM-Ebola, as well as two blood transfusions from Brantly. The transfusions are believed to help a patient fight off the virus because the survivor’s blood carries antibodies for the disease.

Doctors have said it’s difficult to know what exactly helped him fight off Ebola. But they noted Thursday that they’ve been sharing lessons from his case with organizations responding to the outbreak.