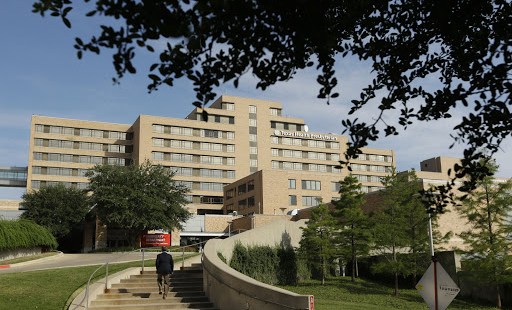 DALLAS (AP) — The first case of Ebola diagnosed in the U.S. was confirmed Tuesday in a patient who recently traveled from Liberia to Dallas — a sign of the far-reaching impact of the out-of-control epidemic in West Africa.

The unidentified patient was critically ill and has been in isolation at Texas Health Presbyterian Hospital since Sunday, federal health officials said.

They have begun tracking down family and friends who may have had close contact with the patient and could be at risk for becoming ill. But officials said there are no other suspected cases in Texas.

Health authorities would not reveal the patient’s nationality or age. And even though they repeatedly referred to the patient as "he," they would not confirm the person’s gender.

At the Centers for Disease Control and Prevention, Director Tom Frieden said the patient left Liberia on Sept. 19, arrived the next day to visit relatives and started feeling ill four or five days later. He said it was not clear how the person became infected.

There was no risk to anyone on the airplane because the patient had no symptoms at the time of the flight, Frieden said.

Ebola symptoms can include fever, muscle pain, vomiting and bleeding, and can appear as long as 21 days after exposure to the virus. The disease is not contagious until symptoms begin, and it takes close contact with bodily fluids to spread.

"The bottom line here is that I have no doubt we will control this importation, or this case of Ebola, so that it does not spread widely in this country," Frieden told a news conference.

"It is certainly possible that someone who had contact with this individual, a family member or other individual, could develop Ebola in the coming weeks," he added. "But there is no doubt in my mind that we will stop it here."

Frieden said he believed the case also marked the first time this strain of Ebola has been diagnosed outside of West Africa.

In Washington, President Barack Obama was briefed about the diagnosis in a call from Frieden, the White House said.

Four American aid workers who became infected while volunteering in West Africa have been flown back to the U.S. for treatment after they became sick. They were cared for in special isolation facilities at hospitals in Atlanta and Nebraska. Three have recovered.

Also, a U.S. doctor exposed to the virus in Sierra Leone is under observation in a similar facility at the National Institutes of Health.

The U.S. has only four such isolation units. Asked whether the Texas patient would be moved to one of those specialty facilities, Frieden said there was no need and virtually any hospital can provide the proper care and infection control.

Dr. Edward Goodman, an epidemiologist at the hospital, said the U.S. was much better prepared to handle the disease than African hospitals, which are often short of doctors, gloves, gowns and masks.

"We don’t have those problems. So we’re perfectly capable of taking care of this patient with no risk to other people," he said.

After arriving in the U.S. on Sept. 20, the patient began to develop symptoms on Sept. 24 and initially sought care two days later. But he was released. At the time, hospital officials did not know he had been in West Africa. He returned later as his condition worsened.

Blood tests by Texas health officials and the CDC separately confirmed an Ebola diagnosis on Tuesday.

State health officials describe the patient as seriously ill. Goodman said the patient was able to communicate and was hungry.

Asked how many people the patient may have had close contact with in that time period, Frieden said, "I think a handful is the right characterization."