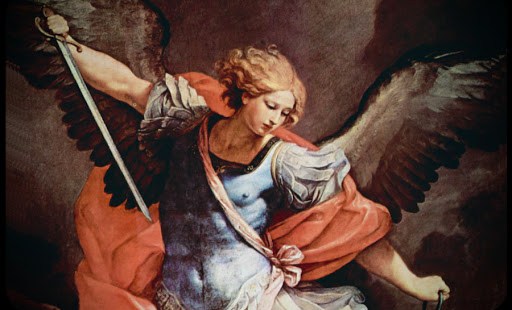 I remember coming away from a conversation with a very holy person years ago, feeling thoughtful. I was much inspired to pray. At the same time I felt like cranking up the Led Zepplin in the car for some relief from too much holy.

The friend I was with asked, “What did you think?”

I said, “He talks about Satan too much.”

This cracked my friend up. Her laughter mystified me.

“It’s just so funny to hear you say that!”

I do dislike hearing about Satan too much. Who doesn’t?

However, it’s hard to tune in to the news and not think about that guy these days. He seems to be in the world’s face, challenging all people of good will in our very faith in good will.

Be not afraid (Dt., 31:8) We come from a long line of prophets and saints, and Jesus is present in us as individuals, and in community, and He has already won the spiritual combat. With Him we can do anything, and, since we are all connected, the good we do has its effect in the world. The indulgent encouragement of God makes our little victories BIG with His endless grace, and gives us power to reign with Him both now and forever, because of His great love. We are the light of the world (Mt. 5:14)

I heard it pointed out once that if you really think about that sentence, it sounds more like it is hell that is on the defensive. Hell’s gates can’t stand against the Church. That’s us. We’re winning. And we will keep on winning.

“[In] a dream I had [as a child.] … I saw … two hideous little devils dancing with surprising agility … in spite of the heavy irons attached to their feet. At first they cast fiery glances at me; then, as though suddenly terrified, [they… threw] themselves down … only to run and hide themselves in the laundry…  overcoming my fears, I went to the window. The wretched little creatures were there, running about, …not knowing how to hide themselves from my gaze. From time to time they came nearer, peering through the windows with an uneasy air, then, seeing that I was still there, they began to run about again looking quite desperate. Of course this dream was nothing extraordinary; yet I think Our Lord made use of it to show me that a soul in the state of grace has nothing to fear from the devil, who is a coward, and will even fly from the gaze of a little child.
~St. Therese of Lisieux

Pope Francis calls this present time a “piecemeal World War III.”  Every material reality has a spiritual reality. We are also at war spiritually.

“‘Spiritual combat’ is [an] element of life which needs to be taught anew and proposed once more to all Christians today. It is a secret and interior art, an invisible struggle in which (we) engage every day…” ~ Pope St. John Paul II

And we should be clear about who our real enemy is.

The traditional weapons of the Church against evil in the world are unconventional. But they are the ones Jesus used to ultimately conquer, also we can put to good use the weapons the Church has been given by Our Lord, and artillery the saints used before us. We have quite an arsenal. Here are just a few of these things to help you fight like a Catholic in the spiritual combat.

“You have only to be still: I myself will fight for you” (Ex. 4:14). Prayer of the heart, sitting in silent trust, praying the rosary, any way you want to pray and connect with God within you, all these things make your soul a channel for the loving will of God into all that goes unhealed and wretched. Prayer fills us and encloses us with God, purifies our souls, and pours Heavenly grace into  the world like an ocean of light.