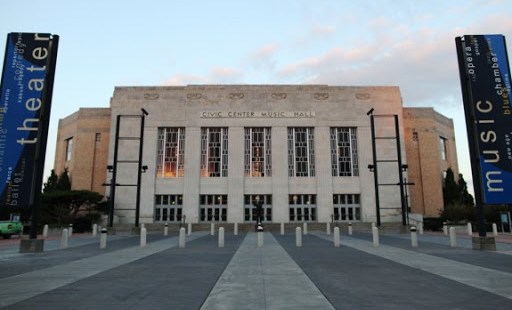 Satan has left the building. The Oklahoma Civic Center Music Hall, that is.

As reported in Patheos, Roman Catholic Archbishop Paul S. Coakley and a priest performed “prayers of exorcism” to rid the Civic Center Music Hall of evil spirits that may have lingered after a satanic “black mass” was held there.

Diane Clay, spokeswoman for the Archdiocese of Oklahoma City, said that Coakley decided to perform the ancient ritual in the Oklahoma City public venue after he learned that some Civic Center patrons were troubled and anxious about the possible diabolical after-effects of the Sept. 21 black mass. An exorcism is a ritual generally performed to cast out a demon from an individual.

“From the beginning, we have taken seriously the dark and dangerous spirits being invited into our community. We anticipated this would be a concern for those visiting the Civic Center, and we’ve received many questions about the safety of the building following the satanic ritual,” Coakley said in a statement.

“To address those concerns, we visited the venue the next morning to pray prayers of exorcism over the place and to pray the prayers for cleansing.”

The Dakhma of Angra Mainyu Syndicate, a group of devil worshipers led by Adam Daniels, held the black mass in the Civic Center’s CitySpace Theatre, a small venue with fewer than 100 seats. Daniels told the 42 people who attended the black mass that it was being held as a mockery of the Catholic Mass so that people would be less afraid of the Catholic Church.

Wednesday, Daniels said he wasn’t surprised to learn about Coakley’s on-site prayers to rid the Civic Center of evil in the aftermath of the black mass.

“I find it hilarious how over-responsive he’s being to all of this,” Daniels said.

“As I said before, it (black mass) is a deprogramming ritual to cast Christianity out of people. All they (the archdiocese) care about is their religious freedom and not anybody else’s.”

Jennifer Lindsey-McClintock, spokeswoman for the Civic Center, said Coakley inquired about visiting the venue and arrived there before business hours, about 7:30 a.m., on Sept. 22, the day after the black mass. She said Jim Brown, the Civic Center’s general manager, let Coakley into the venue and the religious leader’s visit was short.

“It came about very quietly and was private,” Lindsey-McClintock said.

“He (Coakley) felt very strongly about wanting to come in and perform a cleansing of that space of whatever entities he felt might remain.”