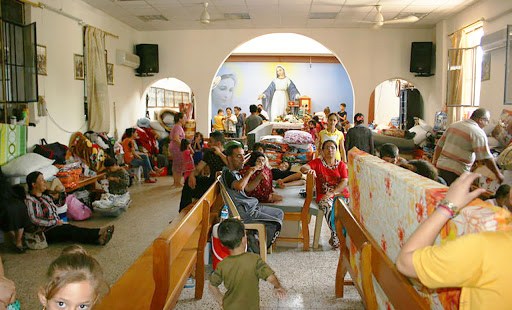 World must decide whether to help them endure winter or resettle them, religious freedom activist says

Tens of thousands of refugees in northern Iraq are facing a winter living in tents or unfinished concrete buildings.

Humanitarian aid organizations, local governments and NGOs are doing what they can to keep internally displaced persons warm, healthy and well-fed, but the task is huge, and some people on the ground say a humanitarian crisis looms.

“It’s very dire. It’s not going to improve very soon. Conditions are deteriorating. People are in desperate need for help, and the government of Iraq has not helped in any way,” said Joseph T. Kassab, founder and president of the US-based Iraqi Christians Advocacy and Empowerment Institute. “Winter is really fierce in Iraq. Lot of people living in shelters or in the open.”
Kassab, whose brother is Bishop Jibrael Kassab of the Chaldean Church in Australia and New Zealand, was himself a refugee from Iraq in 1980.
It is estimated that there are 120,000 Christian refugees in the Iraqi Kurdish capital of Erbil, living in schools, churches, monasteries and parks after they were forced from their homes in Mosul and other cities of the Nineveh Plain over the summer by forces of the Islamic State group.

Natalia Prokopchuk, spokeswoman in Iraq for the Office of the United Nations High Commissioner for Refugees, described several projects the UNHCR is working on to help internally displaced persons get through the winter, including the distribution of blankets and kerosene stoves. "We are also working to winterize tents where people are living, providing insulation to protect them from rain and snow and put insulation on the floors,” she said.But limited resources permit the agency to help only half of the IDPs. Also assisting, whether by building shelters or providing medical care or funding are several Catholic agencies: Aid to the Church in Need, Caritas, Catholic Near East Welfare Association, the Knights of Columbus, and Malteser International—as well as Iraqi-American organizations such as the Iraqi Christian Relief Council. Juliana Taimoorazy, the Relief Council’s founder and president, said her organization is appealing to American companies to donate much needed pharmaceuticals and hygiene products for IDPs.

Because of a shortage of medicines, some people are dying of heart disease and diabetes, said Taimoorazy, an Assyrian Christian who found asylum in the West in the 1980s.

Malteser International, the Order of Malta’s relief agency, is setting up a primary health center in one of two UNHCR camps being built between Dohuk and Zakho, in the north of the region, where winter temperatures can drop to 5 degrees. "I was in Dohuk the other day and saw families living in buildings that are still under construction, without walls," said Malteser’s emergency coordinator, Leigh Ryan, who just returned from two months in the region.

However the IDPs survive the winter, though, a question still remains in the minds of many refugees and those assisting them: “Do Christians have a future in Iraq?”

“They are really traumatized. I never experienced a people so depressed,” said Father Andrzej Halemba, head of the Asia-Africa Department for Aid to the Church in Need, who visited Erbil recently. “They say, ‘There’s no future for Christians here. This is the end. We are not going to survive.’”

Aid to the Church in Need is building a village for some 4,000 refugees to shelter for the winter and supporting the construction of eight schools in Erbil and Dohuk.

Even if the international coalition led by the United States defeats the Islamic State group, Christian refugees say they are reluctant to go back to the homes they fled, according to Father Halemba and others interviewed for this article. Christians, whose numbers have been steadily decreasing over the past 30 years, feel betrayed by the central government in Baghdad, by the Kurdish peshmerga militia, which failed to protect their towns from the Islamic State’s onslaught, in spite of their assurances to the Christian residents, and by their former neighbors, who in many cases stole the property they had abandoned.