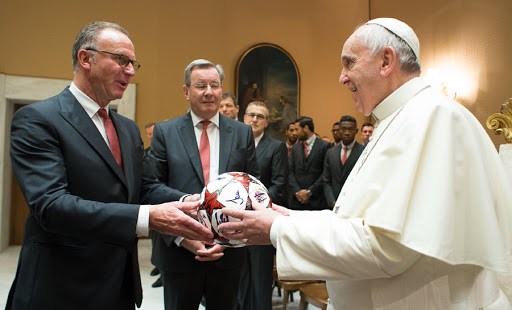 Former club champion Rummenigge: “An exceptional experience, among the greatest of our lives.”

Bayern Munich celebrated last evening’s 7-1 victory over Rome at the Olympic Stadium in a remarkable way: by meeting Pope Francis in a private audience.

The Pope welcomed the President of the Bavarian club, Karl Hopfner, and former club champion Karl-Heinz Rummenigge. He then received from the Bayern Captain Philipp Lahm, and Goalie Manuel Neuer, a customized jersey with the number “1” and the name “Franzisko.”

According to reports on the twitter profile of the Bavarian club, the Pope said he was “surprised” by the score and commented on the game. “Yesterday you played a marvelous match,” he said turning to the team and its coach, Pep Guardiola. Everyone was clearly moved by their extraordinary meeting and more than satisfied after a clear victory.

Club president Karl Heinz Rummenigge – who headed Bayern Munich’s private meeting in the Vatican according to reports on the site of the German club – gave the Pope a soccer ball signed by the entire team, as a symbol of a friendly match whose earnings will be used to fund charitable works to the tune of 1 million euros.