What Can We Learn from Jesus’ Driving the Moneychangers from the Temple? 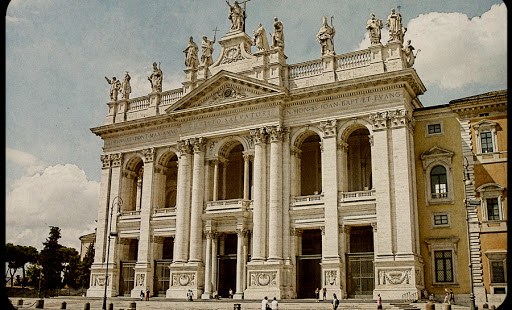 The Feast of St. John Lateran

Suddenly it all came to an end: Diocletian’s Great Persecution, started in 303, was brought to a definitive and momentous end ten years later when Constantine issued the Edict of Milan in 313. By this act, he restored and expanded the religious liberties of Christians and commenced a policy of tolerance and benefaction which today’s feast implicitly recalls.

While the total number of martyrs (3,000-3,500) pales by comparisons to the carnage and horrors visited up the human race since the dawn of Modernity, their deaths, among other things, should cast doubt on the currently fashionable myth of pagan tolerance. The pagan emperors blamed Christians for the weakness of the Roman Empire. In times of crisis, Catholics, with our strange ways and our uplifting and demanding vision of human dignity, are perennial targets for demonization and scapegoating as the darker periods of Church history amply demonstrate.

Constantine’s generosity toward the Church, however, did not lead to the end of the story, as if the last sixteen hundred years had not taught us a thing or two about the blessings and burdens of working in close collaboration with the State, any state. Still, we should be cautious in projecting our evaluation of the centuries that succeeded Constantine, as is sometimes the case today, when the entire “Constantinian Shift” is characterized as a betrayal of the Gospel and a secularization of the Church. This critique, not without some merit, forgets to consider the enormous sense of relief that must have come upon the Church in the wake of this unforeseen turn of events. The same empire, which had tortured, maimed and killed Christians, now wished to recognize a place for Christians in society and further garnished the Church with gifts, seeking Her intercession with God to secure the blessings of peace and prosperity.

Something new was indeed seen upon the earth: besides the legal protections, Christian houses of worship and episcopal residences were now constructed with imperial benefaction, among which is the Basilica of Saint John Lateran, “mother and head of all the churches in the city – and the world.” The appearance of new monumental buildings, in Rome and in the New Rome (humbly named “Constantinople,” meaning Constantine’s City, after its founder), marks in marble and mortar a new stage in the story of the Church, in some ways similar to the experience of the Kingdom of Israel in the Old Testament.

Now the Church could appear visibly and publicly in the cityscapes and landscapes of the Empire, building homes for the prayer, worship, preaching and charity of Her congregations, “churches.” To this day, wherever religious freedom is respected and cherished, we still find parish churches to shelter our communities of prayer, worship, preaching and charity. Where religious freedom is absent, however, Christian life suffers like the martyrs. The wanton destruction of churches in Iraq and Syria, to name but one example of the violence aimed at Christians today, bears this truth out: while the Church is not a building, churches are signs of the blessings of peace and prosperity, pointing to the possibility of a positive and mutually beneficial collaboration between Catholics and the State. The Feast of Saint John Lateran invites us to hope in times of trial and difficulty that God can at any moment raise up a “Constantine.”

Hope in the face of destruction and despair is also one of the messages of the Gospel, wherein Our Lord dramatically announces the imminent destruction of the grand Herodian Temple in Jerusalem. Herod the Great, an Iudemean, from a people whom the Maccabean armies conquered in the Second Century B.C., strengthened his weak Jewish credentials by undertaking monumental building projects, the crown jewel of which was the Temple in Jerusalem. The magnificent Temple was the center of the worship of the true and living God on earth, the destination for annual pilgrimages of tens of thousands, including frequent visits of the Holy Family, the focal point of national aspirations, an important center of commerce and, lastly, a source of fresh, kosher meat. The Temple touched every aspect of Israelite life, and standing guard over it was the Roman garrison in the Antonia Fortress, reminding anyone who entered that Israel was a subject of pagan Rome.