St. Francis Manuscripts Arrive in U.S. After 700 Years in Italy 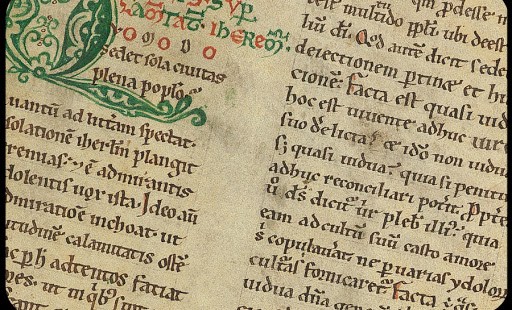 Exhibit will kick off year that, it is hoped, will see Pope Francis in New York.

Rare documents and images from the life of St. Francis are on display in New York, heralding the expected arrival of Pope Francis’ arrival to the city in 2015. This is the first time that the priceless collection has left Italy in 700 years.

The exhibit, “Friar Francis: Traces, Words and Images,” displays 19 fragments and manuscripts dating from the 1220s. Although there are no documents written by St. Francis himself—historians believe he mostly dictated his writings to a scribe—Pope Gregory IX’s letters to Francis and foundational documents establishing the Franciscan order make their appearance.

Archbishop Auza also took the opportunity to announce the visit of Pope Francis—the first Pope to take the name of the saint from Assisi—to the World Meeting of Families in Philadelphia in 2015. He indicated that the Pope would also visit the United Nations in New York at that time.

Marina Sereni, Vice President of Italy’s Chamber of Deputies and native of St. Francis’s home of Umbria, placed special emphasis on the saint’s role in creating interfaith dialogue, particularly between Christians and Muslims, recalling St. Francis’s evangelistic visit to Sultan Al-Kamil of Egypt during the Fifth Crusade in 1219.

In preparation for the exhibit’s arrival in the United States, a team of restoration experts led by Father Pierangelo Massetti of Praglia Abbey in Northern Italy worked for five months to clean each manuscript page-by-page. They repaired small tears with Japanese vegetable fiber and restored aging covers with linen thread.

One of the most precious artifacts is Tommaso da Celano’s Memoriale, an early hagiographical account of Francis’s life composed around 1247, which was later doomed to destruction in place of more accurate, official biographies. Only three copies of Memoriale still exist.

Another jewel is the famed Manuscript 338. It contains the “Canticle of the Sun,” a medieval hymn celebrating the perfection of God’s creation that forms the foundation of poetry and literature for the modern Italian language.

Though museums from around the world have requested to host the exhibit after it departs New York, the friars of Sacred Convent of St. Francis in Assisi are reluctant to allow the precious treasures to go on a world tour. The exhibit will be on public display in Brooklyn’s Borough Hall from December 1 until mid-January, following a private exhibition at United Nations headquarters.