Lifetime’s “The Red Tent” Is No Bible Study 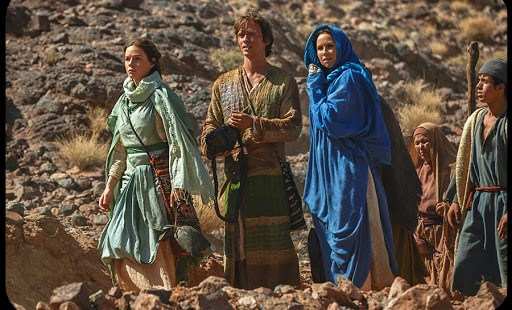 Steamy mini-series based on best-selling book

If all you know of the Bible is confined to what you’ve heard read at church, you might not be too familiar with the story of Dinah (pronounced Dee-nah). After all, she only appears for a few brief verses in Genesis 34, a chapter that doesn’t really get mentioned that often. And for good reason. Hers is not really a family-friendly story.

Genesis 34 relates how Dinah, the only daughter of Jacob and his first wife Leah, is seized and raped by Shechem, son of Hamor the Hivite. Trying to make things right, Hamor comes to Jacob and offers to pay whatever bridal price is demanded if Jacob and his sons will allow Shechem and Dinah to marry. Jacob’s sons agree to the marriage, but only if every male in Hamor’s kingdom consents to be circumcised. Later, while Hamor’s men are still recovering from the obviously painful procedure, Jacob’s sons sneak in and kill every single Hivite, loot their city, and take back Dinah.

And that’s it. We never hear of Dinah again after that. Well, apparently that wasn’t enough for Anita Diamant, an award-winning journalist and author of several Jewish advice books. In 1997, Diamant published The Red Tent, a fictional novel which took the bare bones story of Dinah from Scripture and expanded it into a sprawling tale of inter-generational female camaraderie. The book was a runaway hit, spending months on bestseller lists and becoming a perennial selection for book clubs. And now the Lifetime cable channel has adapted the tale into a two-part miniseries.

The first part of The Red Tent covers mostly familiar territory to those who have perused Genesis. It begins with Jacob coming to work for his uncle Laban where he meets and marries Laban’s two daughters, Leah and Rachel. After fathering twelve sons as well as Dinah, Jacob returns to his childhood home to reconcile with his brother Esau, whom Jacob had previously cheated out of his birthright. That’s where the story of Dinah’s rape occurs.

Except that’s not quite what happens in The Red Tent. With so little detail given about Dinah in the Bible, Diamant decides to play loose with the facts in order to tell the story she’s interested in. For instance, Jacob is no longer tricked into marrying Leah by Laban as the Bible tells it. Instead, after Rachel begs Leah to take her place at the wedding because she’s afraid of sex, Leah and Jacob concoct a scheme in which they falsely accuse Laban of arranging the switch. Publicly humiliated, Laban agrees to allow Jacob to marry Rachel also, as well as the two handmaids, Zilpah and Bilhah. Jacob learns you can get pretty far if you’ve got a smart woman or two on your side.

Of more consequence, the rape detailed in the Bible never occurs. In The Red Tent, Dinah immediately falls in love with Shechem and willfully initiates a little pre-marital sex with him. Following their tryst, the young lovers decide to get married without Jacob’s permission. Jacob is naturally enraged, but his wives calm him down and he agrees to allow the marriage to continue as long as the Hivites get circumcised. His sons have other plans, however, and Dinah soon awakens to find herself covered in her husband’s blood.

So, as a strict Biblical adaptation, The Red Tent is a dud. But that’s not really what the author was interested in writing anyway. In an interview with Ms. Magazine, Diamant explained that she was attempting to explore “the backdrop of the women’s culture, the wholeness of it, the valuing of female relationships — sister, friend, mother, daughter — in a way that was separate from the men."

To that end, Diamant imagined a red tent to which women were sent during their menstruation or when they were about to give birth. Apparently the ancient Jews didn’t actually have such a practice or a place, but it’s a good story device which allows the women characters a place to sit in private and talk to one another without any men being allowed to butt in.