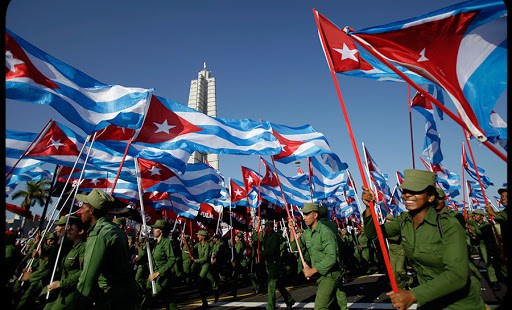 The kind of change in U.S. policy toward Cuba that President Barack Obama announced Wednesday is something the Catholic Church has been working toward for many years.

The Vatican and the bishops conferences of the United States and Cuba have long supported normalization of relations between their respective governments, said Stephen Colecchi, director of the United States Conference of Catholic Bishops’ Office of International Justice and Peace. “The US bishops’ conference has said for many years that the path toward improving human rights and a path toward democracy in Cuba is better served by engagement than by isolation. So we do believe that it’s long overdue.”

The US will restore full diplomatic relations with Cuba and open an embassy in Havana for the first time in more than a half-century after the release of an American contractor held in prison for five years, President Obama announced Wednesday.

In a deal negotiated during 18 months of secret talks, Obama and President Raúl Castro of Cuba agreed in a telephone call to put aside decades of hostility to find a new relationship between the US and the island nation.

Talks reportedly were encouraged by Pope Francis. The Vatican Secretary of State, Cardinal Pietro Paolin, released a statement Wednesday that said representatives from the United States and Cuba met at the Vatican to discuss resuming diplomatic ties last October.

“The Holy Father wishes to express his warm congratulations for the historic decision taken by the Governments of the United States of America and Cuba to establish diplomatic relations, with the aim of overcoming, in the interest of the citizens of both countries, the difficulties which have marked their recent history,” the statement said.

Bishop Oscar Cantú, chairman of the Bishops’ Committee on International Justice and Peace, in a statement Wednesday said the announcement by the Administration "will foster dialogue, reconciliation, trade, cooperation and contact between our respective nations and citizens."

“We believe it is long past due that the United States establish full diplomatic relations with Cuba, withdraw all restrictions on travel to Cuba, rescind terrorist designations aimed at Cuba, encourage trade that will benefit both nations, lift restrictions on business and financial transactions, and facilitate cooperation in the areas of environmental protection, drug interdiction, human trafficking and scientific exchanges,” Bishop Cantú added.

Archbishop Thomas Wenski of Miami, which has a large population of Cuban-Americans, issued a statement noting that Obama and Castro expressed appreciation for the role of Pope Francis “in making possible what seems to be a real game changer in the historically strained relationship between Cuba and the United States.”

“Pope Francis did what popes are supposed to do: Build bridges and promote peace,” Archbishop Wenski said. “He acted much like his namesake, Francis of Asissi, who during the fifth crusade, went to Egypt to meet with the Sultan al Kamil in the interest of peace.”

Archbishop Wenski said the Church in Cuba has “always opposed the embargo, arguing that it was a blunt instrument that hurt the innocent more than the guilty; and the U.S. Church has supported the Catholic Church in Cuba.”

The Miami archbishop noted that Castro seemed to indicate in his comments that his government was open to engage in conversations with the U.S. on issues related to democracy and human rights. “Progress in this area is normally the result, and not the precondition, of such talks—and so the prospect of such talks is a positive development,” he said.