Ida: Oscar Contender About a Nun-to-Be Now Streaming on Netflix 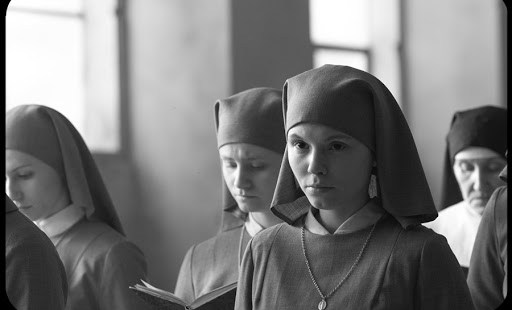 The 2015 Academy Awards shortlist for Best Foreign Language Film was announced not too long ago and amongst the potential nominees is a small little Polish film from 2013 named Ida. Don’t bother looking for it at your local multiplexes, though, because they wouldn’t touch this kind of movie with someone else’s ten foot pole. Not only does Ida have subtitles, but it’s in black and white, utilizes an archaic square aspect ratio, and is visually composed like a Japanese zen painting. In other words, Ida is an art film with a capital ART, which means you’ll likely have to travel to the bohemian side of town if you want to catch it at a theater. Or you can simply watch it on Netflix where it just popped up, that works too.

Wherever you decide the best venue would be, Ida is a film worth checking out. Set in the Polish People’s Republic of the 1960s, the narrative concerns a young novitiate named Anna who, on the cusp of taking her vows, is ordered by the convent’s mother superior to visit her only known living relative. Questioning why she has not heard of this aunt until now, Anna is told the woman has steadfastly refused any contact with the girl since she was first left at the orphanage run by the order Anna is soon to join.

Dutifully travelling to her Aunt Wanda’s home, Anna discovers the woman to be an emotionally detached and amoral alcoholic with little interest in getting to know her niece. Almost immediately, the woman coldly informs Anna that her birth name was Ida Lebenstein, that her parents were Jewish, and that they were murdered during the war due to their ethnicity. This revelation does not appear to cause a crisis of faith for Anna, now Ida, as Wanda seemingly wants, but it does spark a desire in Ida to find her parents’ resting place. Begrudgingly, Wanda agrees to accompany the young nun-to-be on this quest.

Part of the quiet, yet intense journey which follows is a rumination on post-war Poland under communist control. Wanda, as it turns out, once served as a judge officiating over the sentencing and execution of anti-communist agitators, and these actions, along with the events surrounding the death of Ida’s parents, have had a corrosive effect on her soul. Her plight is representative of the emotional and spiritual cost paid by Poland during the Stalinist era, a time of confinement and oppression accentuated by the film’s stark monochrome palette and the cramped aspect ratio of the movie frame.

But there is joy to be found in the country even in such dark times. On one of their stops, Ida befriends a jazz musician named Lis who is playing at the hotel in which she and Wanda are staying. Through this unlikely relationship, Ida experiences popular music and dancing for the first time, and comes to see some of the delights the secular world has to offer. To Wanda, of course, this is a good thing, as she questions how much of a sacrifice Ida’s vows can possibly be without at least a few carnal thoughts to turn her back on.

But as much as the outside world affects Ida, she in turn affects it even more with her quiet spirituality. While Ida keeps things platonic with Lis, the musician is drawn more and more to this young woman who carries something inside most others appear to be missing, and so he doggedly pursues her. As for the atheist Wanda, she must finally face the mental consequences of her life choices once she realizes Ida might not leave the convent in order to carry on the family name. And yet, even though Ida facilitates such spiritual turmoil in those whom she encounters, the mostly silent novice rarely mentions God. Instead, his presence is felt in the compositional choices director Pawel Pawlikowski makes. In almost every scene, the characters occupy only the edges of the frame while great open spaces take up the rest. Amidst all the quiet bleakness, God still hangs above everything.