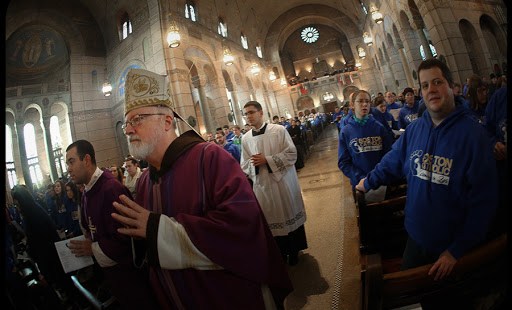 On eve of March for Life, Cardinal O’Malley boosts spirits at Vigil Mass.

Pro-life advocates must work tirelessly to change unjust laws, but must work even harder to change hearts, Cardinal Sean O’Malley told an estimated 11,000 people gathered on the eve of the annual March for Life in Washington, D.C.

The archbishop of Boston, preaching at the opening Mass of the National Prayer Vigil for Life Wednesday evening, called on Catholics in America to build a "civilization of love."

"Solidarity and community are the antidotes to the individualism and alienation that lead people on the path of abortion and euthanasia," Cardinal O’Malley said at the Basilica of the National Shrine of the Immaculate Conception.

No one is under any illusions about the difficulties the pro-life movement faces, 42 years after the U.S. Supreme Court handed down its pro-abortion rulings in Roe v. Wade and Doe v. Bolton. Anyone who may have had hopes that the new Republican control of both chambers of Congress would lead to a swift reveral of fortunes for the pro-life movement would have been disappointed this week. Republican leadership in the House of Representatives decided not to allow a vote on a bill that would have

banned abortions after 20 weeks of pregnancy following objections by rank-and-file lawmakers in the party, including women.

In such an environment, as others have done so often in the past, Cardinal O’Malley focused on the need to change the culture.

"To change people’s hearts we must love them and they must realize that we care about them," said the Capuchin Franciscan cardinal, who is chairman of the US Bishops’ Committee on Pro-life Activities. "They need the witness of our love and our joy. To evangelize is to be a messenger of joy, of good news."

Anyone seeking a "formula for joy" need look no further than the Gospel, he said. "We must learn to look on people with love. An attitude of judgmental self righteousness is not going to change peoples’ attitudes and save babies. We need to be the field hospital, not Judge Judy. We need to be the merciful face of Christ in the way we promote adoption, aware of how difficult it is for birth mothers to choose that option. We also need to expand our outreach in Project Rachel to those whose lives have been devastated by abortion."

But there are other avenues for fighting to protect innocent human life, an obligation every Christian has, he said. One is to work against the culture of promiscuity in today’s society.

"One of the logical ways to reduce the number of abortions would be to discourage the promiscuous behavior that is rampant in our culture," the cardinal said. "The glamorization of promiscuity needs to be reversed by having people speak out against it the way people object to demeaning media portrayals of women and African-Americans. Like these, it is not a matter of passing laws but of changing what we deem as acceptable in society."

Another way is to love and help the poor and counter the pervasive indifference toward suffering in the world. "Part of the Gospel of Life has to be about loving and helping the poor," said the cardinal. "Indeed, reducing poverty will also reduce the number of abortions. Poor and low income women account for more than half of the abortions performed each year in our country."

The national prayer vigil for life routinely draws upwards of 20,000 people in town for the next day’s march. Many stay throughout the night in the vast basilica, to pray both in the main church and the lower crypt church. This year, Pittsburgh Bishop David A. Zubik led the National Rosary for Life, and Bishop Kurt R. Burnette of the Byzantine Eparchy of Passaic, New Jersey, led a night prayer in the church with Bishop Edward B. Scharfenberger of Albany, New York, as homilist.