A Tale of Two Tweets: Pope and Obama Both Focus on March for Life 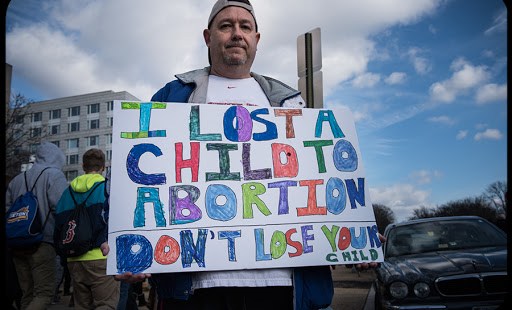 It wasn’t the first time a Pope has sent a tweet across the Atlantic to the annual March for Life, but Pope Francis’ Twitter message was welcomed with as much enthusiasm as the first papal tweet to the gathering was, a few years ago.

“Every Life is a Gift,” said Pope Francis’ Twitter message Jan. 22, echoing the theme of this year’s March for Life. The message went out to over 5.3 million Twitter followers on his English-language account @Pontifex.

By day’s end, his English-language tweet had been favorited over 22,000 times and retweeted over 17,000.

Meanwhile, crowds of pro-life advocates amassed on the National Mall for a rally preceding the March for Life. Speakers included pro-life activists and members of Congress, some focusing on the need to protect disabled children.

Republican Rep. Cathy McMorris Rodgers of Washington state told the crowd that her 7-year-old son, who has Down syndrome, has intensified her commitment to the anti-abortion fight.

Other legislators emphasized the importance of the Health Care Conscience Rights Act, which would implement a broad religious exemption and conscience protections for private employers who oppose the federal contraceptive mandate that is part of the Affordable Care Act.

Congressman Mike Pompeo, R-KS, said the large youth contingent on hand was evidence that "the pro-life movement is stronger than ever," and a reminder that "every single life is a gift."

Virtually every single one of those young people carried a mobile device, and a random look at Facebook or Twitter reminded digital denizens throughout the day of #WhyWeMarch.

That hashtag was the result of a call by the March for Life Education and Defense Fund, which had announced the #WhyWeMarch social media campaign on January 2. "Throughout this Sanctity of Life Month and leading up to the March for Life on the 22nd, we encourage pro-lifers to upload a photo to Instagram, Facebook, or Twitter with the hashtag #WhyWeMarch and the reason you’d like to share ‘why we march’ for life on January 22nd."

They marched, primarily to mark the 42nd anniversary of the 1973 Roe v. Wade Supreme Court decision, which legalized abortion nationwide, protesters held signs with slogans such as, "Defend Life" and "I am a voice for the voiceless" and "Thank God my mom’s pro-life."

And anyone under 42 years of age may have been conscious of the fact that he or she could have been a victim of the Court’s decision. Levi Fox, a volunteer and a graduate of Liberty University, told Catholic News Service, "Half of our generation is missing. Sixty million have been killed since Roe v. Wade, which is why I am dedicating my time to the March for Life."

Abortion rates have come down somewhat in recent years, but they are still too high, according to the second annual report examining "The State of Abortion in America," released recently by National Right to Life. "While recent reports show a significant decrease in the annual number of abortions, tragically, nearly 3,000 unborn children are still killed every day in the United States," said Carol Tobias, president of the organization.

Meanwhile, NARAL Pro-choice America posted a message on its Facebook page, saying, "We’re part of the 7 in 10 who support Roe v. Wade because we believe everyone should decide for themselves whether, when, and with whom to have a family."

Many would dispute the statistics the organization cites. Wednesday night, speaking to some 11,000 Catholics gathered in the Basilica of the National Shrine of the Immaculate Conception, Cardinal Sean O’Malley said that myths about America’s pro-choice stance perdure, in spite of recent findings.