The killing of the Copts and the release of the others is only explained by the will of the assailants. The BBC, for example, reports that eyewitness accounts in one incident of kidnapping involved an armed group dashing into a house full of Egyptian workers, asking whether there were any Christians there, seizing them, and leaving the rest. 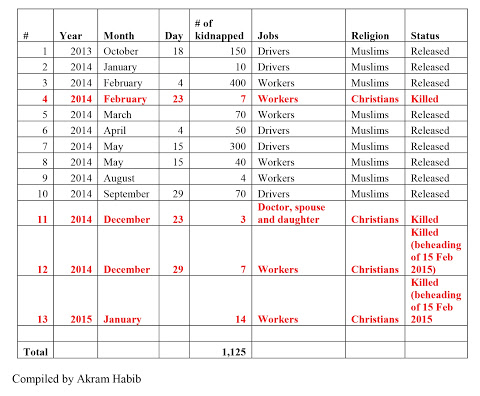 Beyond Libya: Islamists’ systematic targeting of religious minorities in the Middle East
The cleansing of Libya of its Christian population is part of a broader political project of political Islamist groups to rid the world of religious pluralism. Again, it cannot be reiterated enough that this political project seeks to redraw the profile of its political community in a way that is exclusionary of women, artists, human rights activists, those who interpret/practice the faith differently, and the list goes on.

However, there is a striking similarity in the Islamists’ modalities of targeting religious minorities across the borders, whether in Iraq, Syria, Libya or other parts of the region.

The targeting relies on the collaboration of various Islamist networks on scanning the horizons for where Christians live and work. It also relies on local informants sharing the profile of families in great detail and often (though not always) benefitting economically from such transactions. The targeting involves Islamist militants’ enforcement of a ransom in return for securing the right to live; kidnappings targeting Christians in Iraq, which have been happening since the American Occupation of Iraq; and the disintegration of the Iraqi state into sectarian silos. What ISIS brought to Iraq and Syria, however, is a form of religious cleansing of an intensity and scale that has prompted Amnesty International to attest that fresh evidence it uncovered “indicates that members of the armed group calling itself the Islamic State (IS) have launched a systematic campaign of ethnic cleansing in northern Iraq, carrying out war crimes, including mass summary killings and abductions, against ethnic and religious minorities.”

A recently released UN report produced by the U.N. body responsible for reviewing Iraq’s record for the first time since 1998 denounced “the systematic killing of children belonging to religious and ethnic minorities by the so-called ISIL, including several cases of mass executions of boys, as well as reports of beheadings, crucifixions of children and burying children alive.”

There are communities now facing an existential threat.  We recognize that this political project is neither encapsulated in ISIS nor contained in the Libyan boundaries because the beheading is only the tip.

Mariz Tadros
is a fellow at the Institute of Development Studies, Sussex University.  She studies the politics and human development of the Middle East. This article was originally published on Arc of the Universe, the blog of the Center for Civil and Human Rights at the University of Notre Dame.