Joel Osteen’s “Gospel of Me” 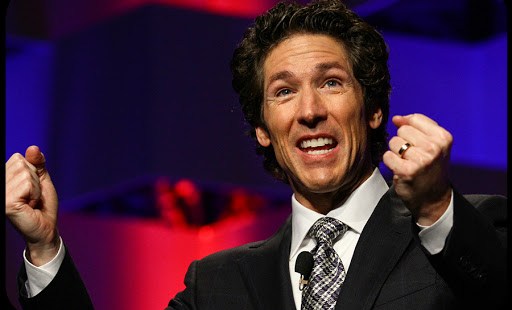 Live at your full potential. Become a better you. Be happier. It’s your time. Live an extraordinary life. Achieve your dreams. Go beyond your barriers. You can, you will.

This is the therapeutic message of Joel Osteen, lifted right from his dust jackets. In contrast with the more classical and philosophically grounded evangelicalism of a Billy Graham or a C.S. Lewis, Ross Douthat termed Osteen’s brand of TV preaching “the gospel of self-help.” But notice it’s not the self-help of the Gospel; self-help is the gospel. The Gospel is the cask to deliver it, shucked and cast out as soon as the intoxicating wine of self-improvement is imbibed.

Contrast this with Pope Francis who, quoting St. Basil of Caesarea of the fourth century, recently referred to money as the “devil’s dung.”  We can follow this line of thinking right back to the New Testament. St. Paul used an even stronger word: skubula. Some translations of the Bible use “filth” or “refuse” in its place in the third chapter of the letter to the Philippians. But that’s not what he said. The nearest English equivalent of the vulgar Greek word is…well, you can Google it. Paul, I suspect, wanted to make an unambiguous point: all of his worldly respect, progress, and prosperity – in short, all of his “self-help” – was all skubala compared to the Cross and Resurrection.

If only Walker Percy lived as long as Billy Graham. Percy, a Southerner, had a special dislike of TV preachers that emerges in both his fiction and philosophical essays, many of which are concerned with semiotics and the importance of language. In an essay titled “Why Are You a Catholic?” Percy writes:

“Language is a living organism and, as such, is subject to certain organic ailments. In this case it is the exhaustion and decrepitude of words themselves, an infirmity that has nothing to do with the truth or falsity of the sentences they form. The words of religion tend to wear out and get stored in the attic…and it doesn't help that when religious words are used publicly, at least Christian words, they are often expropriated by some of the worst rogues around, the TV preachers.”

Percy also skewered self-help books – in fact, he wrote an entire book devoted to satirizing the genre: Lost in the Cosmos: The Last Self-Help Book… “or, How you can survive in the Cosmos about which you know more and more while knowing less and less about yourself, this despite 10,000 self-help books, 100,000 psychotherapists, and 100 million fundamentalist Christians.”

If only he’d lived to see Joel Osteen: a self-help writer, psychotherapist, and fundamentalist all rolled up into one, one who spares words like “sin” and “grace” from further devaluation, but – in a master stroke – only by eliminating them from the conversation altogether. I think Percy would have had a field day.

“When we obey God,” Victoria Osteen declares in one show, a smile plastered across her face, “We're not doing it for God. I mean, that's one way to look at it. We're doing it for ourselves, because God takes pleasure when we're happy. That's the thing that gives Him the greatest joy. So, I want you to know this morning: Just do good for your own self.”

This isn’t new territory for a culture teeming with individualism; even the added tincture of spiritualism to self-help isn’t novel. But whatever it is, it’s about as far away from the Lenten words of Jesus as words get:

“Whoever wishes to come after me must deny himself, take up his cross, and follow me. For whoever wishes to save his life will lose it, but whoever loses his life for my sake will find it.”