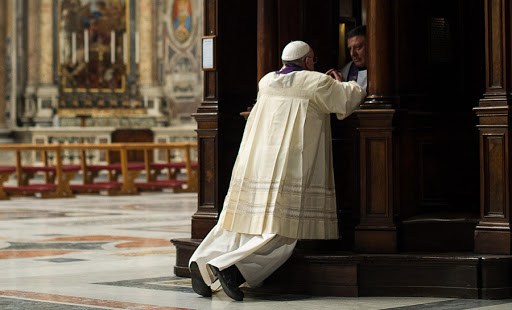 © OSSERVATORE ROMANO / AFP
This handout picture released on March 28, 2014 by the Vatican press office shows Pope Francis during a confession as part of a penitential mass at St Peter's Basilica at the Vatican. AFP PHOTO / OSSERVATORE ROMANO/HO
Share
Print
Diane Montagna - published on 03/11/15

Pontiff likely to be the first in line

VATICAN CITY — Pope Francis is inviting every parish around the world to open its doors for 24 hours this Friday and Saturday, March 13-14, so that the faithful might encounter Jesus Christ anew in the Sacrament of Confession and Eucharistic Adoration.

The Lenten initiative, organized by the Pontifical Council for the New Evangelization, is called “24 Hours for the Lord.” It is intended also to be a time of reflection and prayer, an opportunity to  speak with a priest, and a chance to rediscover — or perhaps discover for the first time — the great mercy at the heart of the Catholic Faith.

The theme chosen for this year’s initiative, in fact, is “God is rich in mercy” (Eph 2:4).

Dioceses, parishes and communities around the world are invited to adapt the initiative to their local situations and needs. A poster of the event can be downloaded for distribution at www.novaevangelizatio.va.

Pope Francis will open the initiative on March 13 in St. Peter’s Basilica, the second anniversary of his election. He is expected to repeat what he did at last year’s opening, when he surprised the world by publicly going to confession. The Holy Father then spent approximately 40 minutes hearing confessions in the Vatican basilica.

After the opening, several churches in key locations throughout Rome will remain open for 24 hours, with confessors available and Eucharistic Adoration.

Pope Francis spoke of the initiative in his 2015 Message for Lent. “As individuals, we are tempted by indifference,” he wrote. “Flooded with news reports and troubling images of human suffering, we often feel our complete inability to help. What can we do to avoid being caught up in this spiral of distress and powerlessness?

“First, we can pray in communion with the Church on earth and in heaven,” the Pope said. “Let us not underestimate the power of so many voices united in prayer! The 24 Hours for the Lord initiative, which I hope will be observed on March 13-14 throughout the Church, also at the diocesan level, is meant to be a sign of this need for prayer.”

Asked how the faithful around the world can best become involved, the pontifical council’s president, Archbishop Rino Fisichella, told the National Catholic Register last month that the success of the event depends on how much "we priests are convinced about the good of the initiative” because to open churches for such a period of time “is a challenge everywhere.”

The initiative will try to repeat the success of last year in Rome. Well-catechized and committed Catholics, many of whom were young people, stood outside churches and invited passers-by to enter. Archbishop Fisichella said Santa Maria in Trastevere was full of young people coming to confession, even at two in the morning.