ROME — Pope Francis on Sunday, March 16, condemned the bombings of two Churches in a Christian neighborhood in Lahore, Pakistan. The twin bombings — at one Catholic and one Protestant church —came as local Christians were attending Sunday Mass and services. The deadly blasts left 14 people dead and 78 wounded.

The attack followed last December’s Peshawar school massacre, when 7 gunmen — including one Chechen, two Arabs and two Afghans — entered the Army public school in the northwest Pakistani city of Peshawar and opened fire on staff and children, killing 145, including 132 children between 8 and 18 years of age.

The Taliban has claimed responsibility for all the attacks.

Now they are targeting all schools. Aleteia has obtained from sources in Pakistan a note to schools, addressed to “Apostate Rulers”, “Fools of Civil Society”, and “Appeasers of the Crusaders,” threatening further attacks on schools throughout Pakistan, including “Christian missionary ones, Army-owned, and those associated with the Western educational system.” 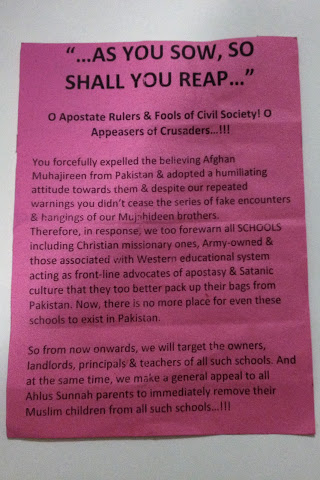 The note, pictured above, was recently disseminated throughout Pakistani schools and at other locations. According to sources, many people who received it had no idea how, or by whom, the notes were delivered, suggesting that the Taliban has penetrated into the fabric of the system.

Recently the Archbishop of Karachi and President of Pakistan’s Catholic Bishops’ Conference, His Excellency Joseph Coutts, was in Rome attending an event sponsored by the Vicariate of Rome.

While in Rome, Archbishop Coutts sat down with Aleteia for an interview. The Archbishop discussed the roots of the Taliban and how these once CIA-trained operatives are now using their expertise against the West; the reasons why they are now targeting schools and churches; and why, for them, the Crusades are not over.

Your Excellency, for those of our readers who are not familiar with Pakistan, can you tell us a little about its geography?

Pakistan is a fairly large country, nearly 2000 road miles from south to north, with an estimated population of 180 million. On the East, we have a huge border with India, nearly 2000 kilometers. Right on our head, we have a short border with China, with high mountains. The second highest mountain in the world — K2 — is in Pakistan, along with 4 or 5 other peaks that are among the highest in the world.

In the Northwest we have our border with Afghanistan, all mountainous area, a border of over 1000 kilometers. Then to the direct West is the border with Iran, and the Arabian Sea in the south.

You’re in a rough neighborhood.

Yes, several brutal attacks have been carried about by the Taliban inside Pakistan in recent months. What can you tell us about the roots of the Taliban?

If you go back, the Taliban were created by our government, and financed by the United States and Saudi Arabia, to fight against the Soviet Union.

The West became worried. They thought — according to the domino theory  — that if Afghanistan fell to communism, next was Pakistan. If Pakistan fell to the Russians, they wouldn’t be far from the Gulf, the Western world’s sources of oil. So the West was determined to stop the Communists before they got any further. Shake hands with the devil if necessary. This was 1979.

The United States didn’t want to get into another messy war, and they found someone to do the fighting. Pakistan is a Muslim country. Afghanistan is 100% Muslim. So men were trained and used as proxies to fight the Russians in Afghanistan, along the mountainous border, which can’t be controlled.

Were all the men who were trained from Pakistan?

They were all Muslim, but from various countries, like ISIS is now. It was an open invitation to Muslim men anywhere. There were Arabs coming from Libya and Saudi Arabia. There were Indonesians, Chechens, and Pakistanis joining hands with their brothers in Islam fighting for their religion. The Soviet Union was beaten back.

But then a civil war developed in Afghanistan, and then 9/11, and everything got messy.

So these people were trained and many of the young men came back into Pakistan full of this zeal for having beaten back a superpower. They thought: “We can do it.” Pakistan is a Muslim country, so they said to themselves: “We should have an Islamic State here.” And then they started working on that.

Now they’ve become so strong, because a lot of arms came from the US and they were trained by CIA agents. So they have all the expertise, and combat experience. And now they are a big, big threat. They started by attacking a number of army posts. Imams preached in the mosques, praising them as great freedom fighters for their religion.

They are now working in a very insidious way. They’ve influenced the thinking of many young people to such an extent that 3 or 4 American girls have joined and they’ve discovered 3 British girls who have wanted to join. You can imagine how much more influential they are in Pakistan, with Afghanistan just next door. There are thousands of Afghan refugees living in camps here and there — lots of young men,  good material to recruit. And now they are in our country.