Francis, Fatima and the End of the World 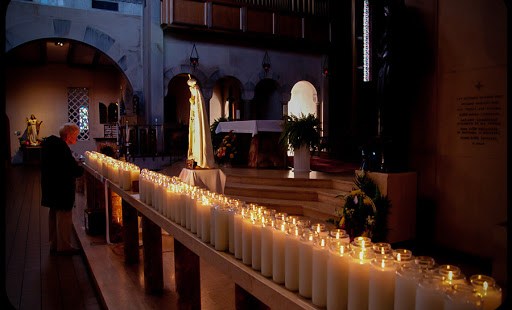 Does the Holy Father know something we don’t?

At the end of April it was confirmed that Pope Francis will travel to Fatima for the one hundredth anniversary of the Marian apparitions, and it is rumored that he will use the occasion to canonize the two youngest seers, Jacinta and Francisco Marto.

This week, on the celebration of the Feast of Our Lady of Fatima, the original image was venerated by the Holy Father at the Vatican. What is Pope Francis’ understanding of the message of Fatima, and why does the Virgin of Fatima seem so important to him, as she was to his two predecessors?

The stunning events at Fatima in May 1917 took place as the world lurched into the twentieth century—a century that would see two world wars, genocide on a massive scale, the invention of the atomic bomb and the rapid rise of technologies that would transform the world and the human race.

The Pope’s planned visit to Fatima and his celebration this week continues his interest and involvement with Fatima. His pontificate was consecrated to Our Lady of Fatima on May 13, 2013, by the cardinal of Lisbon. During the ceremony the cardinal prayed that Pope Francis be granted “the gift of discernment to know how to identify the paths of renewal for the Church.” He also prayed that the Holy Father be protected “in the difficult hours of suffering, so that he may overcome, in charity, the trials that the renewal of the Church will bring him.” This was followed five months later by Pope Francis consecrating the world to Our Lady of Fatima on October 13, 2013.

Pope Francis’ continued devotion to Our Lady of Fatima indicates a historic and significant link of the papacy with the prophecies of Fatima. John Paul II visited Fatima three times, and in 2000 beatified Jacinta and Francisco in 2000, and was also responsible for entrusting the Third Millennium to the Immaculate Heart of Mary in front of our Lady’s statue, on Sunday, October 8, 2000, when over 1,400 bishops were present for the Jubilee Mass.

Pope Benedict XVI also strongly supported Fatima and visited the shrine in May 2010, when, among other things he said: “We would be mistaken to think that the prophetic mission of Fatima is complete.”

In the famous vision of Pope Leo XIII Satan said if he had one hundred years he would be able to destroy the church. It is interesting to note that the dates were October 13, 1884. Two “Fatima Dates” crop up time and again. Pope John Paul II’s attempted assassination took place on May 13, 1981. Pope Francis consecrated the world to Our Lady of Fatima October 13, 2013. The apparitions began on May 13, 1917 and ended with the miracle of the sun on October 13, 1917. Could these momentous sign from heaven indicate the beginning of the one hundred years in which Satan would attempt to destroy the church? If so, are we approaching the end of that time? Does this make the pope’s visit to Fatima in 2017 more important than a mere centenary celebration?

When he celebrated the consecration to Our Lady of Fatima in October 2013, Pope Francis said: “The statue of our Lady, which has come from Fatima, helps us to feel her presence in our midst. Mary always brings us to Jesus…nothing is impossible for God’s mercy! Even the most tangled knots are loosened by His grace. And Mary, whose ‘yes’ opened the door for God to undo the knot of the ancient disobedience, is the Mother who patiently and lovingly brings us to God, so that He can untangle the knots of our soul by His fatherly mercy.”

This Pope, like his two predecessors seems acutely aware not only of the spiritual battle with Satan, but also of the possibility that time is short. In contemplating “the end of the world” we have to ask ourselves what that means.