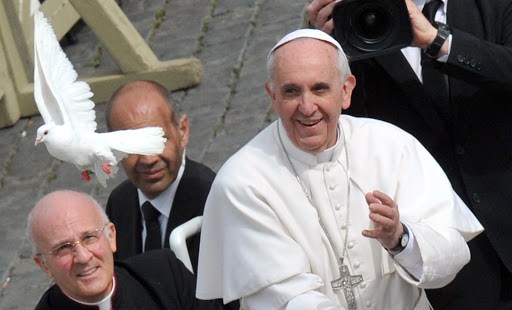 VATICAN CITY — Christian unity is grace, not glue. And Jesus' wounds are the “price” he paid so that the Church might be united in him and in the Father. Christians today are therefore called to pray for the grace of unity, and to battle so that the “spirit of division, war, and envy” does not insinuate itself among them. This was the focus of Pope Francis’ homily on Thursday morning at Holy Mass in the Chapel of Santa Marta.

“The great prayer of Jesus” that the Church be united, and that Christians be “one,” as Jesus is one with his Father. And beside it, the “great temptation” not to yield to the other “father,” the one of “lies” and “division.” In his homily, Pope Francis plunged into the atmosphere of the Last Supper and into the depths of Jesus’ words spoken and entrusted to the Apostles before his Passion, and set forth in today’s liturgy.

The price of unity

It is consoling, Pope Francis observed, to hear Jesus speak to the Father about his desire not to pray only for his disciples, but also for all those who will believe in him “through their word.” It is a phrase often repeated, but which deserves greater attention, he said.

The faces of division

Jesus prays “for the unity of his people, for the Church.” But Jesus “knows,” Pope Francis said, “that the spirit of the world” is “a spirit of division, war, envy, jealousy, even in families, even in religious families, even in dioceses, even in the Church as a whole: it is the great temptation.” One that leads, he added, to gossip, to labelling, to branding people. All attitudes, the Pope said, that this prayer forbids.

“We have to be one, one as Jesus and the Father are one. This is the true challenge for all Christians: to leave no room for division among us, not to allow the spirit of division, the father of lies, to enter in among us; always to seek unity. Each one as he is, but seeking to live in unity. Has Jesus forgiven you? Then forgive everyone. Jesus prays that we may be one, one. And the Church greatly needs this prayer of unity.”

Unity is grace, not glue

There is no such thing as a Church held together with “glue,” Pope Francis joked, because the unity that Jesus invokes “is a grace of God,” and “a battle” on earth.

“We need to make room for the Spirit,” Pope Francis said “in order that he might transform us, as the Father is in the Son —one.”

“Another counsel Jesus gives us in his farewell discourse is to abide in Him: ‘Abide in me.’ And he asks this grace, that we may all abide in Him. And he tells us why, he tells us clearly: ‘Father, I desire that they also, whom you have given me, may be with me where I am.’ That is, that these may abide there, with me. Abiding in Jesus, in this world, ends in abiding with him ‘to behold [his] glory’.”