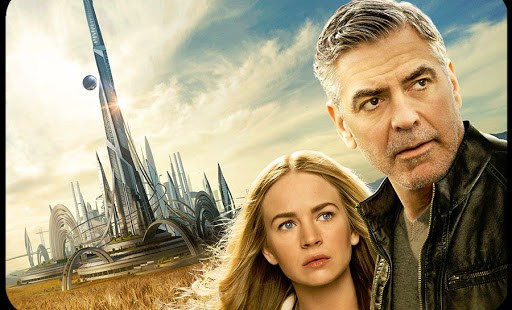 As soon as the news hit that director and writer Brad Bird was beginning work on a script for The Incredibles 2, the Internet rumor mill went into high gear, speculating on everything from who would return to voice their characters to who would be the main villain. Apparently Baby Jack-Jack was the lead candidate for that role according to an enraged social media. Bemused, and a little irritated, Bird took to Twitter to quell the original movie’s fans. “Reports have been saying a LOT of nonsense about the plot of Incredibles 2,” he wrote. “Just relax. I’ve got this.”

You see, Brad Bird is an optimist. And not only is he an optimist, but he really, really wants you to be one too. So much so that his latest movie,Tomorrowland, reaches near evangelistic levels in its encouragement of an optimistic outlook on the world. And as with so many things with an evangelistic zeal, there are going to be a lot of critics who don’t appreciate it. Ignore them. Tomorrowland is perfectly fine, preachiness and all.

Without giving too much away, Tomorrowland begins with Frank (George Clooney), who tells us how, as a young boy, he traveled to the 1964 World’s Fair in hopes of entering his nearly-functional jet pack into the inventors’ competition. Though the judge of the contest, Professor Nix (Hugh Laurie ), was less than impressed with Frank’s pile of parts, a mysterious young girl named Athena (Raffey Cassidy) was smitten enough with the boy’s optimism and “never give up” attitude to provide him with the means to enter Tomorrowland. This other-dimensional realm, Frank discovers to his awe, is a hidden utopia in which the scientific geniuses of Earth had been gathering in order to solve all of the world’s problems.

Fast forwarding to the present day, the movie picks up with Casey (Brittany Robertson), the brilliant teenaged daughter of a NASA engineer, as she details her attempts to sabotage the government’s efforts to close down the launch facility where her father works. Casey, you see, dreams of going to space, but with all the recent government cutbacks in the space program, those are dreams that are unlikely to ever be fulfilled. Casey refuses to give up on them, though.

Through a series of bizarre, often comical events, Casey finds herself being offered her own invitation to Tomorrowland by a mysteriously unaged Athena. The catch (there had to be one) is that the only way Casey can get there is if the now much older Frank takes her, and having been exiled from Tomorrowland for reasons he refuses to discuss, he’s extremely reluctant to do so. As in, "get off my lawn or I’ll destroy you" reluctant. To make matters worse, Casey is also being pursued by a squad of killer robots.

Oops, did I forget to mention the killer robots? Well, like I said, I don’t want to give away too much. Still, I should probably mention them because there are a few intense action sequences that might not go over too well with some of the more sensitive little ones out there. My own twelve year old found the scene in which a frightened-near-to death-Casey spends an entire minutes’ worth of screen time beating a robot to death with a baseball bat (just to be sure) pretty hilarious, but others might not, so consider yourself warned.

Unfortunately, by the time you read this, the flood of negative reviews out there (which oddly weren’t subject to a pre-release embargo like mine was) will probably have squelched most of your appetite to see this film, killer robots or no killer robots. Which is too bad in a way, because I’m sure there are plenty of folks out there like myself who might actually enjoy Tomorrowland. In fact, I have to say I’m actually a little puzzled at some of the criticisms I’ve heard.

One is the notion that Tomorrowland is somehow a bad movie because the third act is a little weak, a somewhat common complaint whenever screenwriter Damon Lindelof is involved in a project. Now, I’ll be the first to admit that the ending is a bit of a letdown. For a movie full of characters who are supposed to be mental giants, one would hope the denouement would involve a more cerebral solution than simply blowing things up. But, alas, it doesn’t. When push comes to shove, Tomorrowland ends up being just another big budget summertime action movie (the release date should have been a hint), and in those kind of movies, well, something’s going to get blown up. But you know, the exact same thing happened at the end of Big Hero 6, another movie about well-meaning scientific geniuses, and I don’t remember everybody squawking about that.