Magdala, the Home Town of Mary Magdalene, Is Being Resurrected

The Galilee is now an extra-special place to visit, especially for women

In a place called Magdala, along the sea of Galilee, something amazing has been going on for the past nine years.

The story begins in 2004 when Rev. Juan M. Solana, director of the Pontifical Institute Notre Dame of Jerusalem Center, a guest house for Christian pilgrims, was inspired to build a retreat center in the Galilee region where much of Jesus’ ministry took place.

Four plots of land were acquired on the northwest shore of the Sea of Galilee near the small Israeli town of Migdal and the destroyed Arab village of Al-Majdal—both named for the ancient town of Magdala, which was the only town on the western side of the Sea of Galilee until Herod Antipas began to build Tiberias in the year 20.

Fr. Solana’s plan was to knock down some holiday cabins from an old beach resort and build a 300 person retreat center with a restaurant and spirituality center. By 2009 everything was in place for construction to begin—except for a routine dig of the site, which is a requirement in the region. No one expected to find anything, but less then two feet below the surface diggers struck something hard—a stone bench. 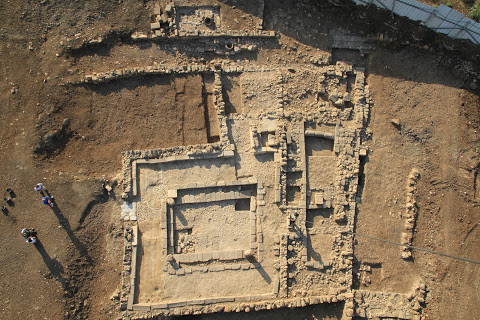 It soon became clear that this wasn’t any stone bench, but part of a first century synagogue, one of only seven from the Second Temple period known to exist, and the first to be found in the Galilee region. It is also the first synagogue excavated from the time of Jesus where we know from Scripture that He actually walked and taught. In fact, local coins found in a side room of the synagogue were dated from the year 29—when Jesus would likely have been active in His ministry.

According to Fr. Eamon Kelly, vice-chargé of the Pontifical Institute of Notre Dame who is also involved in the Magdala project, the synagogue is the most beautifully decorated of all seven, full of beautiful mosaics and frescoes. It was also active until the year 67.

"Among the Jewish people who used it would have been Jesus’ disciples who were not yet separated from the Jews, and for this reason the synagogue is also a kind of ‘icon’ of our commonality, what we share from our origins, " said Fr. Kelly. 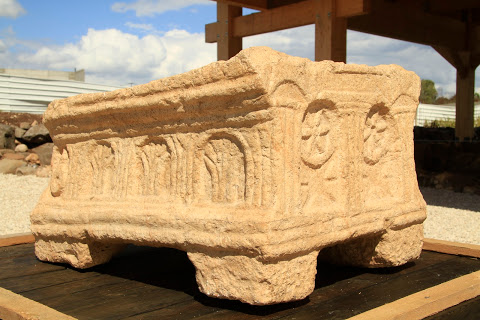 In the synagogue, archeologists discovered the sculpted "Magdala Stone," considered by many experts to be one of the most outstanding discoveries of the last 50 years. Carved into the Stone is the oldest Menorah found to date, as well as the only Chariot of Fire found in Israeli archeology. All of the symbols on the Stone are related to the Second Temple. Fr. Kelly says there are currently many theories about the Stone’s purpose and meaning and speculation will continue for a long time.

Not only did archeologists find the synagogue, they unearthed an entire town—the ancient town of Magdala, believed to be the home town of Mary Magdalene. So far, the dig has uncovered three ritual purification baths, supplied by fresh spring water (the highest of the six possible gradations of water quality for a ritual purification bath, according to experts), market places, residential areas, thousands of first century coins (including numerous “widow’s mites”), lots of period pottery, and even a Roman sword in its sheath. In addition, the infrastructure for fish processing has been discovered. A similar one exists in Spain, but it’s not nearly as complex and well developed, according to Fr. Kelly.

"Flavius Josephus reported that fish processed in Magdala was sold in the markets in Rome and that has now been validated, " he said.

Another significant finding is the market place of the first century port. It was here that fishermen brought their catch to sell for export. It is a significant place for Christians as it is likely where the disciples who were fishermen sold their fish. (Flavius Josephus also wrote that 240 boats sailed away with women and children from this port before the Romans crushed the Jewish rebellion in 67-68.) Wharf structures of the port area have also been uncovered, and much more needs to be excavated.