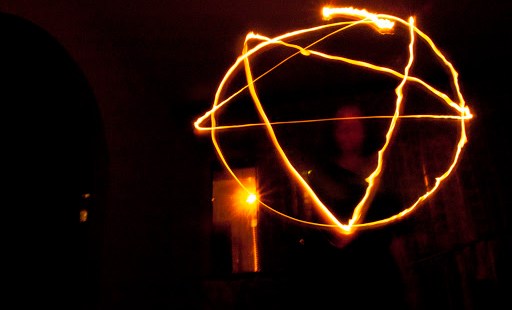 Priest warns: “You have no idea what you’re dealing with”

The Satanic Temple of Detroit threw off protesters of their unveiling of a demonic statue by leaking word that the event would take place in one place but holding it in another.

In addition, in an apparent attempt to weed out Christian moles who might disrupt the presentation of the statue, the Satanic Temple required everyone who had a ticket (for which they paid $25 and up) to sign a quasi-legal document in which they agreed to “transfer” their soul to Satan.​

“I agree that by signing this document under any name, given or adopted, actual or pseudonymous, I am hereby avowing my soul to Satan (aka Abbadon, aka Lucifer, aka Beelzebub, aka The Antichrist),” the document read in part. “I do so knowing that He (aka The Fallen One, aka The Father of Lies) or any of His representatives may choose to collect my eternal soul at any time, with or without notice. I understand that my signature or mark representing any name, real or made up, upon these papers constitutes a lasting and eternal contract, and that there will be no further negotiations on the matter of my eternal soul.”

Any serious Christian who had any thought to slip in would certainly take pause before signing the document.

But if you were one of the 700 who agreed to sign, you’d be in for a revelry of punk music and public displays of affection among scantily-clad persons of a range of genders. Above the band was a suspended cross—hung upside down—and on the front of the stage was a logo with the words “This is my body, this is my blood.”

For the main event, two shirtless men held candles on either side of the statue and unveiled it shortly before midnight, upon which the men embraced each other with a kiss on the lips.

The unveiling revealed a nine-foot-tall bronze statue of Baphomet, a goat-headed winged human figure with horns and hoofs. He is seated, flanked by a boy and a girl, and rests beneath a pentagram.

Fear not. The pseudonymous Jex Blackmore, who directs the Satanic Temple’s Detroit chapter and organized the unveiling, told TIME Sunday that Baphomet symbolizes a “reconciliation of opposites, emblematic of the willingness to embrace, and even celebrate differences.”

Asked whether her group is a religious organization (or rather an anti-religious organization) she explains that it’s less of a church and more of an affinity group, built around what she repeatedly refers to as “Satanic principles.” It’s not the dogma you might expect.


The Satanic Temple holds to the basic premise that undue suffering is bad, and that which reduces suffering is good. We do not believe in symbolic “evil.”
Fox News reported that the Temple says its concept of Lucifer is "as a literary figure."

“The mission of The Satanic Temple is to encourage benevolence and empathy among all people,” the group’s website states.


Time continued in its report:

… the group does not “promote a belief in a personal Satan.” By their logic, Satan is an abstraction, or, as Nancy Kaffer
wrote for The Daily Beast last year, “a literary figure, not a deity — he stands for rationality, for skepticism, for speaking truth to power, even at great personal cost.”
Whatever their motive, those who participate had better think twice, says Jesuit Father James Martin of
America magazine. He noted in a column that the Satanic Temple claims it is simply exercising their right to “religious freedom,” and “placing the statue there is a counterpoint to those who have erected, or wish to erect representations of the Ten Commandments, and other similar Christian symbols.”
The group hopes to display Baphomet at the Arkansas State Capitol, next to a monument of the Ten Commandments.