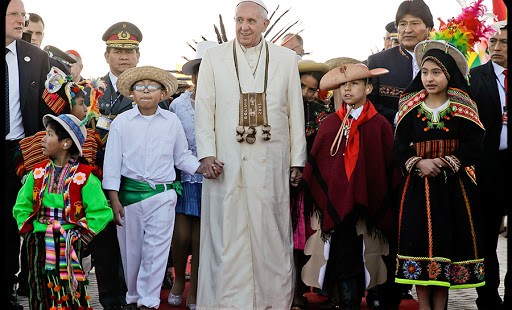 The Holy Father as Good Shepherd

The office of the pope is one of the most complex and fascinating historical aspects of the Catholic Church. Like a great tree with many branches, it stretches back through two thousand years of Christian history. Its roots go even further back into the history and traditions of the Hebrew people.

One of Pope Francis’ greatest gifts is that of being a good pastor. His warmth of personality, tenderness towards children, compassion for the suffering and concern for the needy all exhibit a pastor’s heart. Seeing how his pastoral gift is exercised is deepened by understanding the historic roots of the role of pastor in the church.

The word “pastor” is from the Latin word for shepherd. The pope, as the successor of St. Peter, gets his task of being a shepherd directly from Christ himself. Jesus called himself the Good Shepherd (John 10:11) and the image of Christ as shepherd resonates throughout the gospel. He is the one who goes in the wilderness to find the lost sheep (Luke 15), and he says he is the door to the sheepfold—bringing to mind the custom of the shepherd sleeping in the gap in the wall of the fold through which the sheep would come and go. Jesus leads the sheep to good pasture, but he is also the Good Shepherd who will judge the sheep and the goats at the end of time. (Matt 25)

The image of the Good Shepherd was a powerful one for the first century Jews since, in their agrarian culture, livestock were a main source of livelihood. Everyone would have known that a good shepherd was a good steward, a faithful servant, a strong person and a reliable worker. The sentimental image of a kindly man looking after a baby lamb is only a minor part of what it meant to be a good shepherd. The good shepherd would discipline his sheep, go and find them when they were lost, rescues them, heal their wounds and fight off the wild beasts to protect them.

After his resurrection Jesus gave the job of Good Shepherd to Saint Peter. In John 21 he asks Peter three times if he loves him, then says, “Feed my sheep.” In doing so Christ the Good Shepherd delegates his job to St. Peter, and for two thousand years the job of chief pastor of the church has been handed down from one pope to the next. When we see Pope Francis, therefore being a kindly, good and gentle shepherd we are seeing the ministry of Jesus Christ alive in the world today.

The role of Good Shepherd, however, goes back further than Saint Peter and Jesus Christ. The idea of the good shepherd resonates throughout the Old Testament. The nomadic Hebrew people were shepherds in the wilderness, and then in the promised land. King David was a shepherd boy, and scholars believe the well loved Psalm 23—“The Lord is My Shepherd” was written by David. In that psalm, for the first time, the image of shepherd is ascribed to God himself. He is the one who will lead his flock to good pasture and clean water. He is the one who will protect them and lead them away from evil. He is the one who sets a table before them and anoints their wounds with oil.

The Hebrew’s intimate knowledge of keeping sheep, and the skills required to be a good shepherd provided good spiritual content not only for David, but also for the Old Testament prophets. Jeremiah recognizes that the priests and kings of Israel are the divinely appointed shepherds of the people. The prophet Micah voiced God’s desire to gather his scattered people as a shepherd gathers his flock, and Ezekiel predicted that God himself would come to the shepherd of his people Israel. Therefore when Jesus announces that he is the “Good Shepherd” his hearers would have understood that he was fulfilling the prophecies of Micah and Ezekiel.