Pope Francis: “The Divorced and Remarried Are Not Excommunicated” 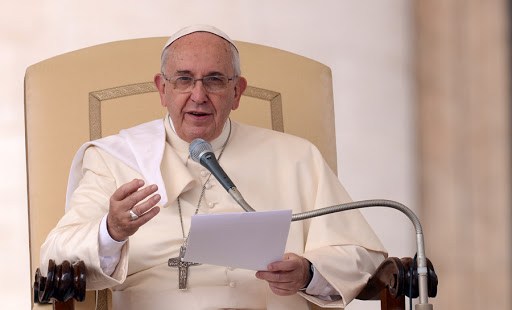 Understanding the Pope’s words in light of the teaching of Pope St. John Paul II and Benedict XVI

VATICAN CITY — In his first weekly general audience after a summer break, Pope Francis called the Church to reflect on how she cares for divorced and civilly remarried Catholics, but contrary to mainstream media reports, he did not propose anything new.

Yet what he did say, and what he didn’t, seem to reveal his intention to leave open the debate on the most controversial issues to be discussed at the upcoming Synod on the Family.

Addressing pilgrims in the Vatican’s Paul VI Hall on Wednesday, Pope Francis reaffirmed the Church’s teaching that divorce and civil remarriage “contradicts the Christian Sacrament” of marriage. But he equally sought to dispel the erroneous belief that divorced and remarried Catholics are irrevocably cut off from the Church.

“They are not excommunicated, and they absolutely should not be treated that way,” he said. “They are always part of the Church.”

Pope Francis therefore encouraged divorced and civilly remarried Catholics to pray, to listen to God’s Word, to attend Holy Mass, to form their children in the Catholic faith, and to be committed to charitable works and serving the poor.

The Pope based his remarks on what is arguably the most important text for understanding the Church’s stance on divorced and civilly remarried Catholics — paragraph 84 of Pope St. John Paul II’s Apostolic Exhortation, Familiaris Consortio. In this papal document written some 35 ago Pope St. John Paul II, following the 1980 Synod on the mission of Christian Family in the modern world, he said:

“I earnestly call upon pastors and the whole community of the faithful to help the divorced, and with solicitous care to make sure that they do not consider themselves as separated from the Church, for as baptized persons they can, and indeed must, share in her life.”


But if one takes a closer look at Familiaris Consortio n. 84, one will notice that Pope Francis draws exclusively on the first part of the text, omitting the second part in which Pope St. John Paul II articulates the doctrinal and pastoral reasons why the Church does not allow Catholics who are divorced and remarried to receive the Holy Eucharist:

“However, the Church reaffirms her practice, which is based upon Sacred Scripture, of not admitting to Eucharistic Communion divorced persons who have remarried. They are unable to be admitted thereto from the fact that their state and condition of life objectively contradict that union of love between Christ and the Church which is signified and effected by the Eucharist. Besides this, there is another special pastoral reason: if these people were admitted to the Eucharist, the faithful would be led into error and confusion regarding the Church’s teaching about the indissolubility of marriage.”


Pope St. John Paul II then explains in what instances divorced and civilly remarried Catholics can be reconciled with Christ and His Church.

“Reconciliation in the sacrament of Penance which would open the way to the Eucharist, can only be granted to those who, repenting of having broken the sign of the Covenant and of fidelity to Christ, are sincerely ready to undertake a way of life that is no longer in contradiction to the indissolubility of marriage. This means, in practice, that when, for serious reasons, such as for example the children’s upbringing, a man and a woman cannot satisfy the obligation to separate, they "take on themselves the duty to live in complete continence, that is, by abstinence from the acts proper to married couples.”

“The Church professes her own fidelity to Christ and to His truth. At the same time, she shows motherly concern for these children of hers, especially those who, through no fault of their own, have been abandoned by their legitimate partner.”


Pope Benedict XVI was equally concerned that divorced and civilly remarried Catholics not feel excluded from the life of the Church. At the 2012 World Meeting of Families, he called Catholic communities at the parish level “to do whatever is possible to help them to feel loved and accepted, to feel that they are not ‘excluded’ even though they cannot receive absolution or the Eucharist.” Those who are divorced and civilly remarried, he said, “should see that, in this state too, they are fully a part of the Church.”

During his catechesis, Pope Francis himself acknowledged his predecessors’ merciful approach to the divorced and remarried, saying: “In recent decades, the Church has been neither insensitive nor slow to act” in their regard. And he thanked “the many pastors who, guided by [his] Predecessors, have worked diligently to let these families know they are still a part of the Church.”

“The biblical image of the Good Shepherd (Jn 10:11-18) sums up the mission that Jesus received from the Father: that of giving his life for the sheep,” Francis said during Wednesday’s audience, quoting Evangelii Gaudium no. 47.