Saint Lawrence: A Martyr Calling Us All to Holiness 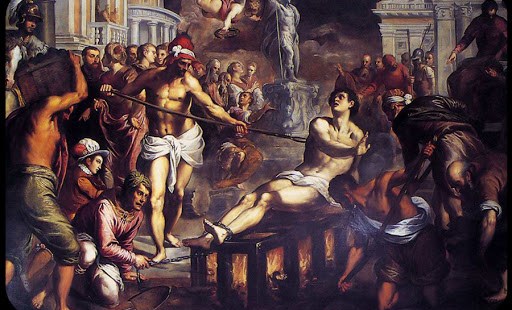 For more than 1,750 years, Christians have celebrated the memory of a simple deacon who died at the hands of Roman authorities for no reason other than his faith in Jesus. To call Lawrence a “saint” seems perfectly natural because he was undoubtedly a man of faith who offered his life in service to God and the Church as a deacon. But we also, quite appropriately, honor Lawrence with the title of “martyr.” Yes, Lawrence died a horrific death (ancient tradition tells us that he was roasted on a gridiron), but being a martyr is really about much more than losing one’s life for a cause.

The word martyr comes from the Greek word “martus” (μαρτυς), which has the same basic meaning as our English word “witness.” With this in mind, Sr. Shawn Carruth, O.S.B., has described martyrs as being “truth-tellers.” But why was this word for a courtroom witness ascribed to those who died because of their belief in Jesus and fidelity to the teachings of the Church? The answer to that question has two parts. First, the martyrs were witnesses of the reality of the presence and action of the Risen Lord in the Church. They saw, firsthand, the power of God at work in the lives of their leaders and fellow-Christians. The second aspect flows from the first: the martyrs were witnessing to the world that there are truths that transcend the realities of our day-to-day existence.

Unfortunately, for many, the witness of Saint Lawrence has been limited to his cruel and unusual martyrdom. However, his full testimony reveals for us three truths: the triumph of charity over greed, of faith over doubt, and of life over death. Lawrence stands before us, urging us to remember that we, too, are witnesses that holiness is our common quest and aim.

The Meaning of Stewardship

Like good stewards of the manifold grace of God, serve one another with whatever gift each of you has received. —1 Peter 4:10

In a visit to Rome’s Basilica of Saint Lawrence Outside-the-Walls in 2008, Pope Benedict XVI highlighted the responsibility Lawrence had as a “steward” in administrating the material goods of Rome’s Christian community. We recall that when the Church’s first deacons were ordained for ministry, the apostles chose men of “good standing, full of the Spirit and of wisdom,” who could be appointed to serve the needs of the poor (cf. Acts 6:1-4). Lawrence and his six fellow-deacons supported the work of the bishop and presbyters of Rome in similar ways. Following the murder of Pope Saint Sixtus II and those other deacons, Lawrence was left as the sole steward of the Church’s possessions.

As a good steward, Lawrence recognized that his responsibility was not really to protect the material possessions of the Church, but to protect the Church, the Body of Christ. Lawrence’s actions make him an icon of the good steward described in the First Letter of Peter. When a Roman official ordered him to hand over the Church’s goods or face death, Lawrence sold what he could and gave the proceeds to the Church’s true “treasure”—the poor and sick of Rome. As Blessed Rabanus Maurus said, “What can be more wonderful than to give away what is earthly and transitory and so buy the kingdom of heaven?”
Although we often think of stewardship in terms of how we give our “time, talent, and treasure,” it is ultimately about recognizing and appreciating something’s true value. Lawrence understood that, while he was mandated to administer the “things” of the Church, the real treasure was Christ himself, present in the sick and poor. Lawrence knew the value of human life. While his actions ultimately led to his condemnation and execution by the Roman officials, had never been the possibility of things playing out in any other way. Understanding that life itself is a gift, Lawrence, a wise and prudent steward, did not hesitate to offer his own life in order to protect the treasure given into his care. One of the hallmarks of true Christianity is how we evaluate what has real value: “For where your treasure is, there also will your heart be” (Matthew 6:21).

The Flame of Faith

Some will say to you, “You have faith and I have works.” Show me your faith apart from your works, and I by my works will show you my faith… faith apart from works is barren. —James 2:18, 20b

When we hear the stories of saints, especially those who lived lives so different from our own, we can often dismiss them, denying their humanity, reducing them to cold stone statues or the other-worldly figures on holy cards. And yet, if we are really attentive to their stories, the saints can teach us what it means to be a true Christian.

Saint Lawrence was a man who expressed his faith in Jesus Christ in both his life and his death. But the flames which claimed this holy deacon’s life did not compare to the fire that burned in his heart. Although he willingly offered his life for Christ in his suffering and death, he had already testified to his faith through his care and concern for the poor: “Religion that is pure and undefiled before God, the Father, is this: to care for orphans and widows in their distress, and to keep oneself unstained by the world” (James 1:27). When Saint John Damascene urged his contemporaries to “carefully observe the manner of life of all the apostles, martyrs, ascetics and just ones,” he would have certainly included the example of Lawrence among those worthy of imitation.

Lawrence’s greatness lay not in the manner of his death or even his mandate to administer the goods of the Church in diaconal ministry. His greatness can, in fact, only be discerned with the eyes of faith—he was obedient to the voice of the Lord calling him to “take up his cross” and to pour out his life for others. Because of his unshakeable faith, Lawrence could completely empty himself in the service of his brothers and sisters. Although the Roman official ordered him to surrender the Church’s wealth, Lawrence, inspired by faith, presented those whom he had fed and clothed, gaining for himself a reward that could never be lost.

The Power of Love

For love is strong as death. —Song of Songs 8:6

Are martyrs simply “shouting into the wind”? Does their witness, their testimony, make any difference? As an answer, we have the words of Jesus himself: “Unless a grain of wheat falls into the earth and dies, it remains just a single grain; but if it dies, it bears much fruit” (John 12:24).

The “truthtellers” of our Faith were not simply dying for a cause or an ideology. Lawrence, Pope Sixtus and his companions, and all the holy martyrs died for love of a Person. They gave their lives out of love for One who gave his life for each of us. Saint Lawrence died because he chose to care for and protect the poor and because of his faith and this teaches us something about the death of Jesus. And, conversely, in the shadow of the Cross, we discover the chains of the prison, the glowing iron of a grid, and the sword of execution; the death of Christ unlocks the meaning of Lawrence’s sacrifice.

In reflecting upon the death of Jesus, the “dying grain,” Saint Cyril of Alexandria observed that “the fruit of Christ’s passion is life for all, both the dead and living, for his death was the seed of life.” Because of the gift of life offered by the self-sacrificing love of Jesus, Lawrence found true life. Through loving, Lawrence was able to accept a share of the disgrace and hardship that Jesus experienced. And, in doing so, he attained the same goal and glory. Love is as strong as death only when we are able to accept all the little deaths that we experience each day, holding fast to the promise of life offered to us in the death of Jesus.

We are called to be “truth-tellers,” like Saint Lawrence. Although we may not be led to give our lives in the same way as those whom we call martyrs, we share a common vocation to sustain one another, to continually grow in faith, and to live out a love that is completely self-giving. As we celebrate the Feast of Saint Lawrence on August 10, the most fitting tribute we can offer to Saint Lawrence, protector of Rome and patron of deacons, is to “read” in his life and death the Gospel which we profess day-to-day and to allow that Good News to constantly guide us in our search for God and service of the Church.

Silas Henderson is a catechist, retreat director, and writer whose reflections and articles have appeared in numerous Catholic publications. He is also the author of From Season to Season: A Book of Saintly Wisdom and Moving Beyond Doubt, as well as the upcoming books Lights for a Waiting World: Celebrating Advent with the Saints (Abbey Press) and With An Undivided Heart: A Life of Saint Aloysius Gonzaga (Ignatius Press). He currently serves as the managing editor of Abbey Press Publications and Deacon Digest Magazine. You can find him at www.fromseason2season.blogspot.com and www.facebook.com/SilasSHenderson.

This article is adapted from “The Testimony of Saint Lawrence” which was first published in the November 2011 issue of Deacon Digest Magazine. It is reprinted with permission.