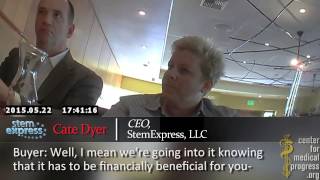 Planned Parenthood, the largest abortion provider in America, is a “volume institution” when it comes to supplying baby body parts for scientific research, says the head of a fetal tissue collection company. But even that is not enough.

Cate Dyer, CEO of StemExpress, is caught on undercover camera in the latest stealth video from the Center for Medical Progress saying the company would need “another 50 livers a week” to meet the demand for fetal tissue.

The new video, which went live Tuesday, is the eighth to be released in an undercover exposé of Planned Parenthood’s trafficking in body parts of aborted babies. StemExpress, a major buyer of fetal tissue from Planned Parenthood, had tried to suppress the video with a court order, unsuccessfully.

“Planned Parenthood has volume, you know, because they are a volume institution,” Dyer commented during a business lunch with undercover videographers posing as representatives of a human biologics company interested in making a deal. Dyer explained that StemExpress does business with hundreds of facilities and the demand for harvested organs from aborted human persons is extremely high.

“What would make your lab happy?” asks one of the actors.

Reacting to the latest video was Judie Brown, president of American Life League, who commented: “This video reveals a devilish harvest operating at a nearly unimaginable scale. This is human sacrifice to the gods of science, and it’s on a level that dwarfs the atrocities of past civilizations. Planned Parenthood treats innocent preborn human persons as cattle at a meat market, butchering our future for profit today. It must end; Planned Parenthood and its co-conspirators must be defunded and shut down forever.”