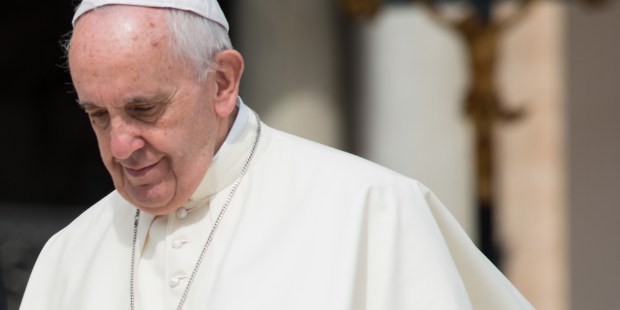 Before he became Pope, Jorge Bergoglio had first-hand experience with the suffering caused by bureaucratic hurdles

By means of a Motu Proprio, Pope Francis has made important changes to the canonical process for declaring nullity. The decision involves the suppression of the requirement of a twofold decision in favor of nullity, the introduction of a briefer process, and recommending that all annulment processes be free.

A good anecdote to help us understand Pope Francis’ interest in swiftly resolving cases of matrimonial nullity is the case of his niece María Inés Narvaja.

In an interview previously published on Aleteia, she explains how Pope Francis, when he was still just Jorge Mario Bergoglio, took an interest in her marital situation. “I married my husband in a civil marriage first, and then in the Church four years later,” she admits. She explains that her uncle “had submitted the paperwork for an annulment and the decision took a long time to arrive, so I had to wait for those four years… All that time he was like a great father to me, and I am very grateful to him for that.”

The interview with María Inés Navaja shows two aspects of Pope Francis’ personality that help us to understand the changes he is implementing. “My uncle has two characteristics: The first is an impressive memory, and the second is that he listens a lot, but doesn’t judge, and never tells you what you have to do. I remember when I told him that I couldn’t wait to until getting married in the Church, that I was a grownup now and I was going to get married in a civil marriage; he answered that ‘it’s the best news you’ve given me.'”

Pope Francis has always had a special sensitivity concerning  marriage processes and annulments. In November of 2014, before a general audience at St. Peter’s, the Pope greeted participants in a course organized by the Tribunal of the Roman Rota.

There, Pope Francis surprised everyone once again with two new anecdotes. The first spoke about the work of the inter-diocesan Tribunal of Buenos Aires: “I don’t recall, but I think that on the level of first instance it has 15 dioceses; I think the furthest is 240 km [150 miles] away… One cannot, it’s impossible to imagine simple, common people going to the Tribunal: they have to travel, they have to lose work days, many things… They say, ‘God understands me, and so I go ahead, with this weight on my soul.”

Pope Francis concluded: “And Mother Church must do justice and say, ‘Yes, it’s true, your marriage is annulled – no, your marriage is valid.’ It is a matter of justice to say it. This way they can move forward without this doubt, this darkness in their spirit.”

Likewise, regarding the possibility of making annulment cases free, Pope Francis explained how he had to fire one of the workers at the Tribunal. “We must also be very careful that the procedures are not in the context of business deals: and I’m not speaking about something out of the ordinary. There have even been public scandals. I had to dismiss a person from the Tribunal, some time ago, who said ‘10,000 dollars and I’ll handle the two procedures for you, civil and ecclesiastic’. Please, not this!”

Pope Francis, before being Pope, was a priest and a bishop. He has experienced suffering in his own family (in this case, due to the situation of his niece María Inés) and the drama of waiting for an annulment. But he has also suffered as bishop from the difficulty that the faithful experience in order to have access to the tribunals, and how some people try to make a profit off of the suffering resulting from an invalid marriage.

For all of these reasons, he knows how much good it can do for these people to have these bureaucratic processes be swift and possibly free. These three anecdotes explain Pope Francis’ position on this subjects.