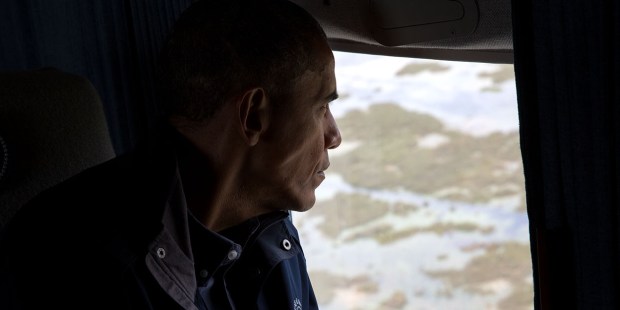 This official White House photograph is being made available only for publication by news organizations and/or for personal use printing by the subject(s) of the photograph. The photograph may not be manipulated in any way and may not be used in commercial or political materials, advertisements, emails, products, promotions that in any way suggests approval or endorsement of the President, the First Family, or the White House.
Share
Print
Elizabeth Scalia | Sep 18, 2015

We need not respond to every seeming “outrage”, especially when it is manufactured specifically for that purpose

On social media that question has been repeating with the regularity of an exhaled mantra, and if one takes the bait and clicks on the provided link, one reads Thomas D. Williams’ piece on the interesting collection of Catholic dissenters who will enjoy personal introductions to Pope Francis, via the American President. “In a stunning show of political indecorum,” wrote Williams, “Obama has invited a series of individuals who publicly flout Catholic teaching, including a pro-abortion religious sister, a transgender woman and the first openly gay Episcopal bishop, along with at least two Catholic gay activists.”

Well, that is certainly a giddy representation of who currently sits at the cool kids’ table in the U.S. cafeteria.

One caveat: whether Sister Simone Campbell is truly “pro-abortion” or simply too prideful to tolerate being associated with pro-life sensibilities as they are represented within our politics is worth asking, largely because Campbell has herself suggested the question.

A larger question, though, is this: did anyone really expect anything different from President Obama, who seems to enjoy presenting himself as an exception to every rule?

Why would anyone expect Obama to introduce Pope Francis to people who might politely be called “more conventional” Catholics and Christians, when there are unconventional ones all around?

The unconventional ones, after all, create a more seductive narrative: Obama, the spiritual maverick, challenging the Vicar of Christ to wake up and love the complex, the suspect, and the marginalized.

Except Pope Francis already does that very well, and hardly needs the prompting of a political showman to do it some more.

While some would call Obama daring, others might just as easily call him cowardly, suggesting he would never outright tell the pope that he has issues with Catholicism.

That he does have issues is evidenced by the president’s wholly unnecessary confrontation with Catholic institutions over the HHS Mandate, and his administration’s refusal to co-operate with the USCCB’s effective outreach to victims of human trafficking, unless that outreach includes providing contraception, sterilization and abortion to women.

But the president will not admit to having “issues”, at least not to the pope; he instead lets his actions speak for him. Packing his guest list with “sinners” is not at issue. We are all sinners. Packing the list with open dissenters to church teaching, though, is a purposeful, planned and deliberate rebuke to the church.

These theatricals are just a game. Obama puckishly courts controversy and the world wonders whether the pope will squirm.

Francis will not squirm; he will greet everyone to whom he is introduced with perfect courtesy and warmth, because the pope is better than anyone at seeing the human person before him as a created creature, beloved of God, and in need of both respect and mercy.

But the game is not actually about challenging the pope: it’s about keeping the culture wars flaming and political divisions alive; it’s about manipulating the angry right into pitching a fit because the pope didn’t pivot away from Obama’s guests, shouting “Arrepentirse! Repent!”; it’s about cueing the angry left to cry, “Shame! See how these hateful Christians shove one another!” while the press shuffles forward chanting that Francis is, “one of us; one of us!”

This opinion piece isn’t about the people Obama is introducing to the pope. Francis wants to meet everyone, as he should, and he goes out of his way to do so, time and again. It’s about Obama’s own cynical move to exploit Peter, for the sake of the culture wars.

This manipulation is such a predictable (and really tiresome) game, it’s surprising how few people have fun with it, or simply laugh at it, which — in truth — is always the best response to stage managers and deluded illusionists.

Do not rise to new bait. When Pope Francis engages Obama’s guests with Christ-like interest and warmth, remember that such engagement is always the necessary first action of a successful missionary, and say a prayer for all involved, that Christ’s light might permeate, and his peace may prevail.