Pope at Vespers: Conflicts in the Church a Sign That the Church is Alive and the Spirit is Acting 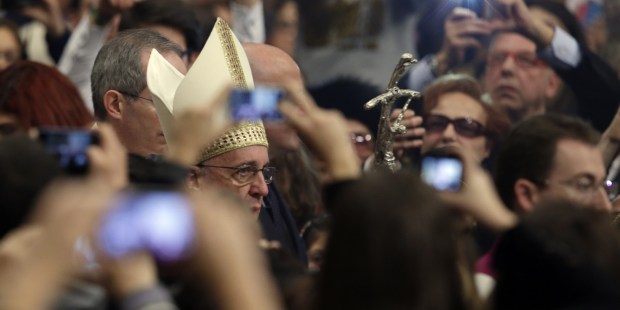 But speak forthrightly, not behind one another’s backs, Francis counsels priests and religious

Official Text of of Pope Francis

Celebrations of Vespers with Priests, Men and Women Religious and Seminarians at the Cathedral of La Habana

This is the prepared text of the speech Pope Francis was to give at Vespers in the Cathedral of Havana. However, he spoke extemporaneously to the priests, religious and seminarians gathered.

We are gathered in this historic Cathedral of Havana to sing with psalms the faithfulness of God towards his people, with thanksgiving for his presence and his infinite mercy. A faithfulness and mercy not only commemorated by this building, but also by the living memory of some of the elderly among us, who know from experience that “his mercy endures forever and his faithfulness throughout the ages”. For this, brothers and sisters, let us together give thanks.

Let us give thanks for the Spirit’s presence in the rich and diverse charisms of all those missionaries who came to this land and became Cubans among Cubans, a sign that God’s mercy is eternal.

The Gospel presents Jesus in dialogue with his Father. It brings us to the heart of the prayerful intimacy between the Father and the Son. As his hour drew near, Jesus prayed for his disciples, for those with him and for those who were yet to come (cf. Jn 17:20). We do well to remember that, in that crucial moment, Jesus made the lives of his disciples, our lives, a part of his prayer. He asked his Father to keep them united and joyful. Jesus knew full well the hearts of his disciples, and he knows full well our own. And so he prays to the Father to save them from a spirit of isolation, of finding refuge in their own certainties and comfort zones, of indifference to others and division into “cliques” which disfigure the richly diverse face of the Church. These are situations which lead to a kind of isolation and ennui, a sadness that slowly gives rise to resentment, to constant complaint, to boredom; this “is not God’s will for us, nor is it the life in the Spirit” (Evangelii Gaudium, 2) to which he invited them, to which he has invited us. That is why Jesus prays that sadness and isolation will not prevail in our hearts. We want to do the same, we want to join in Jesus’ prayer, in his words, so that we can say together: “Father, keep them in your name… that they may be one, even as we are one” (Jn 17:11), “that your joy may be complete” (Jn 15:11).

Unity is often confused with uniformity; with actions, feelings and words which are all identical. This is not unity, it is conformity. It kills the life of the Spirit; it kills the charisms which God has bestowed for the good of his people. Unity is threatened whenever we try to turn others into our own image and likeness. Unity is a gift, not something to be imposed by force or by decree. I am delighted to see you here, men and women of different generations, backgrounds and experiences, all united by our common prayer. Let us ask God to increase our desire to be close to one another. To be neighbors, always there for one another, with all our many differences, interests and ways of seeing things. To speak straightforwardly, despite our disagreements and disputes, and not behind each other’s backs. May we be shepherds who are close to our people, open to their questions and problems. Conflicts and disagreements in the Church are to be expected and, I would even say, needed. They are a sign that the Church is alive and that the Spirit is still acting, still enlivening her. Woe to those communities without a “yes” and a “no!” They are like married couples who no longer argue, because they have lost interest, they have lost their love.

The Lord prays also that we may be filled with his own “complete joy” (cf. Jn 17:13). The joy of Christians, and especially of consecrated men and women, is a very clear sign of Christ’s presence in their lives. When we see sad faces, it is a warning that something is wrong. Significantly, this is the request which Jesus makes of the Father just before he goes out to the Garden to renew his own “fiat.” I am certain that all of you have had to bear many sacrifices and, for some of you, for several decades now, these sacrifices have proved difficult. Jesus prays, at the moment of his own sacrifice, that we will never lose the joy of knowing that he overcomes the world. This certainty is what inspires us, morning after morning, to renew our faith. “With a tenderness which never disappoints, but is always capable of restoring our joy” – by his prayer, and in the faces of our people – Christ “makes it possible for us to lift up our heads and to start anew” (Evangelii Gaudium, 3).

How important, how valuable for the life of the Cuban people, is this witness which always and everywhere radiates such joy, despite our weariness, our misgivings and even our despair, that dangerous temptation which eats away at our soul!

Dear brothers and sisters, Jesus prays that all of us may be one, and that his joy may abide within us. May we do likewise, as we unite ourselves to one another in prayer.