A Walk on the Holy Side: Nun Helps Transgendered Find Christ 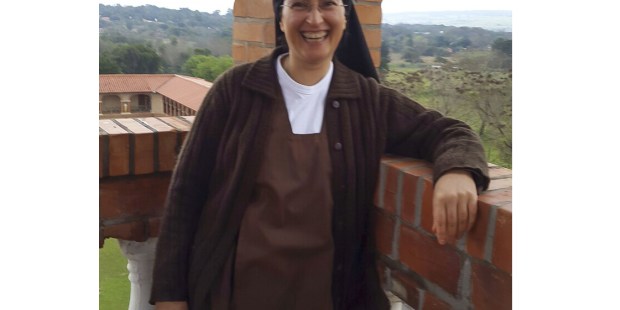 A safe place, decent work, and an atmosphere of prayer help former prostitutes in Argentina

For the past 10 years, Sister Monica Astorga, a Discalced Carmelite in the central Argentine city of Neuquen, has helped a group of transvestites and transsexuals who decided to give up prostitution and addictions to alcohol and drugs. She has started them on the path of recovery and reintegration into society.

It began in 2005, when a transvestite named Romina showed up at her Carmel. Romina had tried to make a donation to a local parish, Our Lady of Lourdes, but when the parish found out that the money came from prostitution, the matter was referred to the nun.

Sister Monica talked for an hour with the Romina, who felt inspired to bring friends to the convent.

A few days later, these friends did come; they prayed together and shared their experiences and sorrows—especially, the religious said, from the years where they were abused as children.

“We went to pray and afterwards, I asked them, ‘What are your dreams?’ because a person without dreams doesn’t have a life. They told me that they wanted to become hairdressers or cooks and have their own business. But one group member named Katty told me that she wanted to have a clean bed to die in. “Why? Because the average age of a transgendered person is about 40 years,” the religious said.

At that point, the nun heard a calling and decided to get down to work.  She contacted Caritas in Neuquen and Bishop Virginio Bressanelli and opened a hair salon and a dressmaking cooperative. A home was renovated as a residence.

“It was thought that the house would be a place for them to die in, but that was too upsetting,” Sister Monica said. “So we decided to make it a meeting place, and I asked the bishop if I could use it as a sewing workshop.”

Katty, who wanted a clean bed to die, now leads the meetings and the sewing courses and hosts more transsexuals and transvestites from the streets.

“We have a monthly meeting. Seeing them praying for peace and joy and other things is something you have to see to believe. You will see that you are dealing with human beings, not animals, as some people sometimes treat them. For me it is very rewarding to see them pray. I believe my level of prayer cannot be compared with theirs.

She continued: “In the beginning, they couldn’t even speak because they were used to fighting. In the past, they competed to get the best places on the street, and they also saw younger ones coming. Now it’s different. They can converse and instead of gathering to drink and use drugs or talk about clients, there is dialogue. They converse quietly. This is a life for them.”

“I do this out of faith,” Sister Monica said. “I try to introduce God into their lives, that they may feel loved by God. I help them feel loved by Jesus, to see him as a friend who loves them as they are,” continued.

But the work has been full of obstacles, she said. “People asked me why there were transgendered people in church. I told them the Church is for everyone. Who was Jesus with? With sinners. What is important here is that they live in dignity, so they don’t have to sleep on the street in cold temperatures—even below zero. What I offer them is a space for prayer and to find a way to work, and the rest is for the judgment of God, which I know is so merciful.”

But the work over the years has also left Sister Monica with plenty of stories, such as Romina, the first who came to her. “She told me she felt a fight against the devil, because she was working in the hair salon, but sometimes she felt the desire to go look for another man, but she said when she felt that temptation she always asked Our Lady to help him. Another told me about taking a drink of holy water to go against the temptations. These are very strong testimonies that Jesus surely encountered when he was with prostitutes and sinners.”

According to the nun, Pope Francis, the former Archbishop of Buenos Aires, knows about the work she does, and this gives her the strength she needs to continue. “In a letter, he asked me to ‘not abandon this leadership the Lord has given you’. He offered his help for what I need.”

When Archbishop Jorge Mario Bergoglio was elected Pope, Sister Monica sent greetings to the new Bishop of Rome from herself and her “girls.”

“He responded saying that he doesn’t judge them and he loves them and may they know that Jesus and Mary love them so much,” she said.

The nun wishes that society would be conscious of the pain these people feel. She tells people that they might have family members who are homosexual. “I ask you to receive them with the love they deserve. Do not reject them because in some cases that could send them into prostitution. All this can be avoided with the support of the families.”

This article appeared on the website of Aleteia’s Spanish edition and comes from the Argentine Catholic Information Agency.