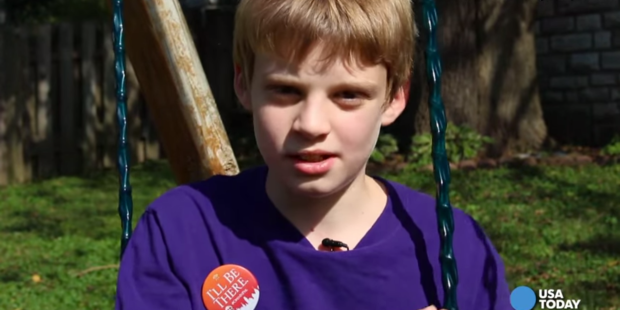 Diagnosed with an inoperable brain tumor, his wish to “be a priest” was granted.

The boy who was a “Priest for Day” is now going to see Pope Francis in Philadelphia.

Diagnosed with an inoperable brain tumor in 2014 , 11-year old Brett Haubrich  of Lemay, Missouri, didn’t want to go to Disney World, meet a famous athlete or go to the Caribbean. In fact, he said he didn’t have any wishes at all.

When the Make-A-Wish Foundation pressed him, and asked him what he wanted to be when he grows up, he answered, “I really want to be a priest,” he told the St. Louis Review.

The young man became “Priest For A Day” at the Cathedral Basilica of St. Louis, and served two Masses at the altar alongside Archbishop Robert J. Carlson.

Brett’s story spread to the Vatican, and soon after an emailed invitation from Philadelphia Archbishop Charles Chaput arrived in his parents in-box.

The St. Louis Review reported that his parents, Eileen and Conrad Haubrich, had no idea an invitation was in the works:

“At first, I thought it was junk mail,” Eileen said, with a laugh. She opened it anyway. “It was very official looking — ‘Oh, my gosh!'”

“I can’t believe it,” Conrad said, adding the invitation arrived “completely unexpected. We were totally unprepared for it. I don’t know how it happened, but it’s great.”

After receiving his diagnosis of a grade three anaplastic astrocytoma brain tumor fifteen months ago, his mother Eileen told USA Today what it was like when they first got the news, “Your whole world falls apart because you never thought that would happen,” she said.

Following a course of chemotherapy and radiation, Brett’s latest MRI shows no evidence of a tumor.

The family credits prayer, and prayers to St. Padre Pio in particular. Known for the stigmata, Padre Pio was a Capuchin Franciscan canonized in 2002 by St. John Paul II. Miracle cures have been attributed to his intercession.

“Brett prays every night to Padre Pio; he’s a favorite of ours,” Eileen said, adding that they anoint Brett with oil blessed in honor of Padre Pio and have a relic as well. They also ask for the intercessions of St. Anthony, St. John Paul, Blessed Teresa and Venerable Father Michael J. McGivney, among others.

“He’s getting his energy back; he’s able to do more things without being tired,” Eileen said. “Just the fact the tumor is not lighting up on the scan … it’s just incredible.”